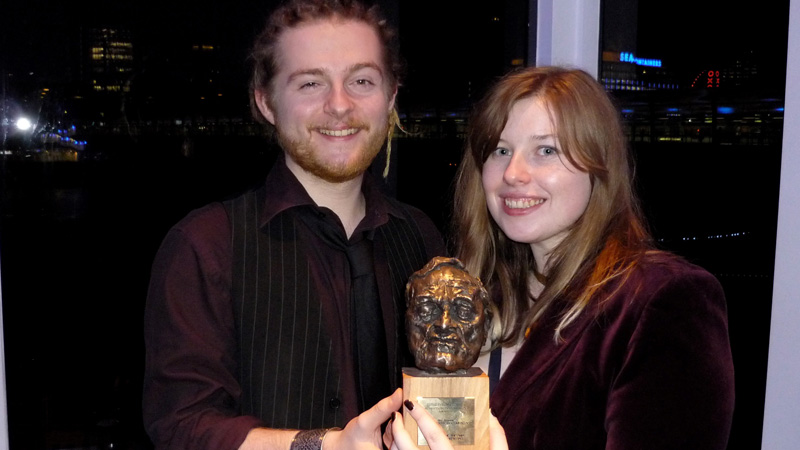 Hosted by TV presenter and choirmaster Gareth Malone, the great and the good of the documentary world came together at the star-studded awards ceremony, celebrating the best documentary filmmaking from Britain and around the world.

Lorraine Heggessy, Chairman of the Grierson Trust, said: "Once again our winning films demonstrate the vibrant, exciting and innovative ways in which the UK documentary industry is the world leader."

Two of the four nominations in the Sky Atlantic Best Student Documentary category were from Westminster's film students. Black Sheep was commended by the judges for "its nuanced storytelling and immersion with the characters in a subject that is very powerful, Islamophobia". The winner, The Wolf, The Ship and the Little Green Bag, was described by the judges as "hugely innovative, with great use of animation in its storytelling". The film, in which the coming-of-age stories of Karin, Peggy and Anne – aged from 70 to 94 – are evoked through an innovative blend of interview and animation, was a collaboration between film and animation students at the University.

Director Kathryn MacCorgarry Gray and Producer Cullum Carver Jones received the award and a cheque for £5,000 from Jolyon Rubinstein, one half of ‘The Revolution will be Televised’. In her acceptance speech, Kathryn paid tribute to one of the subjects of the film: "I'm going to dedicate this to Karin Ades, who was a good friend. She passed away a few months ago; she used to work as a producer in television and she told me that there was no way I could make a film about her, she wasn't interesting enough, but I think this might just have proved her wrong!"

Course Director Peter Hort was delighted: "This award reflects the dedication and imagination not only of all the students that worked on the two nominated films, but also all the tutors and technical staff that helped them to bring their ideas to fruition."

The University of Westminster's Film BA Honours course (formerly known as Film and Television Production BA) is one of the best known in the world, with an international reputation for its academic and practical teaching.

Watch the 'The Wolf, The Ship and the Little Green Bag' win first prize.