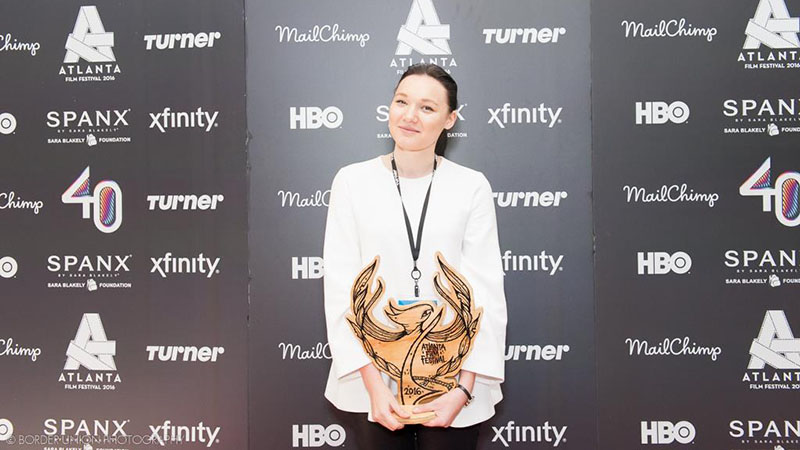 Sara Dunlop will show her film Dreamlands at Cannes Film Festival, and has been nominated for the prestigious Short Film Palme d'Or Award. The film tells the coming-of-age story of Pixie and her friends, who are a group of hedonistic teenagers. Their experiences of love are distant and cold, until she meets a new boy called Blondie.

Out of 5,008 entries, Sara Dunlop’s film made the shortlist of 10 films. It is also the only British short film on the shortlist. The winner of the award will be announced on Sunday 22 May.

Elsewhere, another film graduate from the Film BA Honours course has won the Best Documentary Short in the Jury Awards at the Atlanta Film Festival 2016.

Kristina Tynkevych, Kamile Dementaviciute, Vania Flacommio and Andrei Oprescu, who graduated from the University of Westminster last year, won the award for their graduation documentary Kraina. The documentary looks at how the war between Ukraine and Russia has changed the lives of the people in Ukraine, telling the particular story of a girl called Kristina and her journey since the Ukrainian revolution of 2014.

By winning the award, Kraina is now on the longlist for next year’s Oscars. Their next festival screening will take place at the Short Film Corner in Cannes this month.

Speaking about the success of the film, Director Kristina Tynkevych  said: “The great thing about Atlanta was that although it was a big festival with so many different people attending, the organisers managed to create a cosy atmosphere where everyone felt very much welcome and taken care of. It was great to screen the film in America and see how the American audience (for whom the Ukrainian conflict is quite distant) reacted to the film.

“Seeing that a lot of people felt connected and touched by Kristina and her story was a big relief and the biggest reward at the same time. And of course, it was a great privilege not just to win the award but to screen at Atlanta IFF alongside a selection of amazing, talented films, all of which showed an exceptional standard of filmmaking.

In other film news, Kraina, along with two more of last year’s graduation films, was nominated at the British Universities Film & Video Council (BUFVC) Learning on Screen Awards. Kraina was nominated in the Student Production Documentary Award category, and Offside and Grandma’s Big Schlep were nominated in the Student Production Undergraduate Award category for Best Performance and Best Cinematography respectively. Offside, directed by Westminster graduates Ellie Gocher, Jimmy Dean, Martin Jensen and Sophie Thompson, will be screened at the Tel Aviv Film Festival in June.

Find out more about Film BA Honours in the media.