The Mayor of London, Sadiq Khan, today told the world’s performers that #LondonIsOpen as he hailed the diversity and talent of the capital’s international and home-grown artists ahead of the International Busking Day. According to a recent survey, commissioned by Busk in London, from the University of Westminster’s MusicTank, 86% of visitors surveyed in Portobello Road, Covent Garden and Trafalgar Square said busking enhanced their experience. 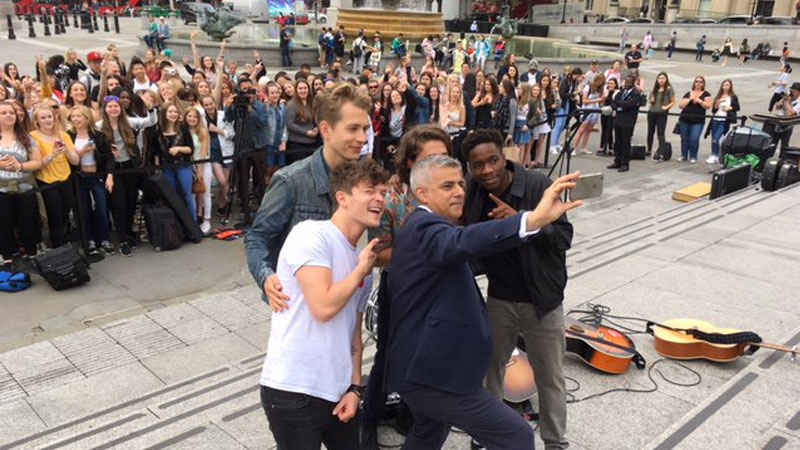 Sadiq Khan’s message is part of his major new #LondonIsOpen campaign, which officially launched earlier this week to spread the message that, following the EU referendum, London remains united, full of creativity and open for business.

“I want to send a message, loud and clear, that #LondonIsOpen to the world’s artists, performers, businesses, people and ideas, and I urge everyone to get behind the campaign and show everyone why London truly is the greatest city on earth” said the Mayor.

Top music stars Jessie Ware, Tinchy Stryder and The Vamps joined the Mayor in his message of welcome. They were also joined by Ireland’s biggest independent band, Keywest, as they met performers who will be taking part in International Busking Day at Trafalgar Square on Saturday 23 July.

The campaign will be promoted at International Busking Day, which is organised by Busk in London and will see London leading 50 global cities and more than 50 locations across the UK in the most ambitious celebration of busking and street performance ever staged.

Buskers worldwide will bring thousands of people together, with music, magic, street theatre, circus arts and other acts on show in cities including New York, Sydney, Barcelona, Hong Kong and Paris.

MusicTank is a music business think tank and consultancy operated by University of Westminster. It is the only unique, neutral information hub for UK music business, addressing change and innovation through informed debate, objective analysis and industry engagement.

Its recent study of 1,042 respondents in prime London street entertainment locations – Covent Garden, Trafalgar Square and Portobello Road – found that 86% of tourists and 62% of residents surveyed were in favour of busking/street entertainment. The overwhelming view of tourists was that busking enhanced the visitor experience, while the majority of residents favoured it for its cultural contribution to the capital. Download the report.