As part of International Women’s Day on 8 March, the University took the opportunity to celebrate the women of Westminster and their achievements, as well as the social, economic, cultural and political achievements of women across the world. 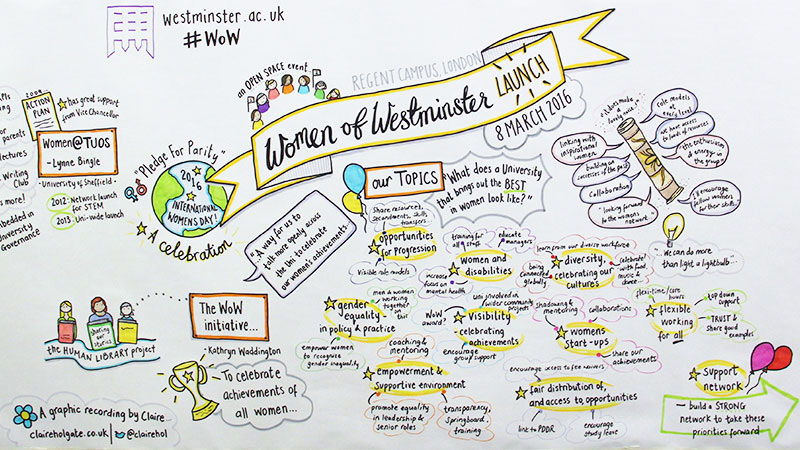 Over 60 people including staff and alumni attended the interactive Women of Westminster (WoW) event in the Boardroom at the Regent Campus. Organised by the Staff Learning and Development team, the event included an open space discussion around how the University could continue to empower and support women at Westminster beyond the celebration event.

The event also featured a screening of the University’s new Women of Westminster (WoW) video featuring staff and alumni from the University sharing their achievements, and talking about the things which have inspired them.

As part of the event’s workshop session, participants were presented with the question, “What does a university that brings out the best in women look like?”, and in small groups explored elements that they believed were important to consider. This included discussions around the advancement of gender equality, representation, progression and success for all. Ideas on the future set up of the University of Westminster’s Women’s Network were also brought to light following from discussions on the value of support networks.

“The WoW event was great. It was really interesting and a great opportunity to meet a diverse range of people from across the University who all place great importance on gender equality. I look forward to seeing the University of Westminster Women's Network flourish”.

Dr Lynne Bingle, chair of [email protected] NET, from the University of Sheffield, also attended the event and gave an insightful talk on how they had set up a women’s network in the institution, with one of their achieved goals being raising the percentage of senior female professors to 23%, which is above average.

The University of Westminster is committed to supporting diversity and equal opportunities, and acknowledges the special role of higher education in promoting equality of opportunity and furthering social inclusion. These goals tie in with the principles of the Athena SWAN Charter, which the University is working towards.

The Athena SWAN Charter is a national initiative that recognises the advancement of gender equality, representation, progression and success for all in science, technology, engineering, mathematics and medicine (STEMM). More recently, its charter has been expanded to recognise work undertaken in the arts, humanities, social science, business and law (AHSSBL), and in professional and support roles, and for trans staff and students.