Academics from the Faculty of Science and Technology represented the University at the annual STEM Gender Equality Congress (SGEC) in Berlin in June. 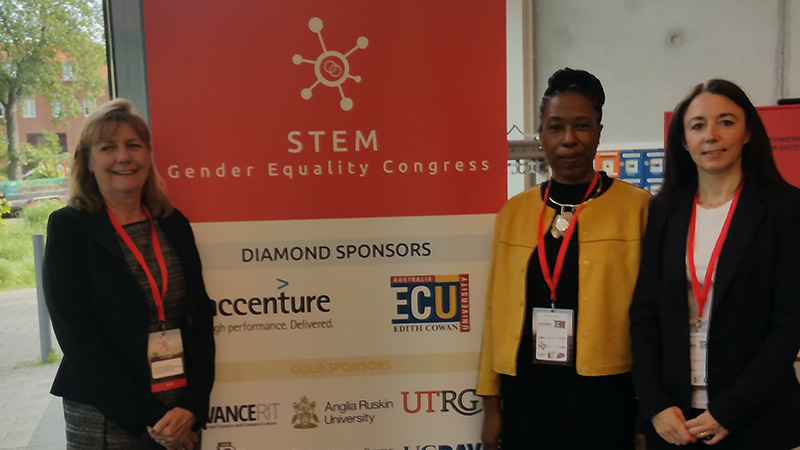 This year the University of Westminster was a gold sponsor of the event which was attended by a diverse audience from over 30 countries where delegates heard inspiring accounts of different ways that institutions, disciplines and countries tackled common themes including: Gender equality in careers, gender balance in decision-making, and the integration of the gender dimension in a research context.

Talks and panel discussions also touched on how to support a culture of gender equality and research excellence, how to embed equality throughout organisations, and delegates shared best practice techniques in equality and diversity programmes.

Kathryn and Deborah shared aspects of the University of Westminster's best practice from its institutional Athena SWAN action plan around recognising and supporting intersectionality in their talk entitled 'Improving gender equality in higher education: Strategies and action plans'.

Speaking about the conference, Kathryn said: "It was a great opportunity to network with colleagues nationally and internationally for future collaborations and knowledge sharing."

Deborah commented: "I felt welcomed and learnt much from senior and influential colleagues in industry and academia about global achievements for gender equality, as well as the challenges that remain for tackling gender inequality."

Speaking about her experience, Anne-Gaelle said: "It was very interesting to hear about the success of some initiatives in the USA to get more girls, in particular from less privileged backgrounds, to study Computer Science and Engineering with a long-term view to reduce the gender gap in STEM and women poverty. The congress format made it possible to network with presenters and attendees, and I am hoping to develop some collaboration, with the University of Texas at El Paso (UTEP) in particular, to improve take up of programming modules by female students on both sides."

Visit the STEM Gender Equality website to find out more about the conference, and learn more about the University of Westminster’s Faculty of Science and Technology.