Universities can provide a catalyst for change through ‘thought leadership’ as the world grapples with mounting problems such as climate change and dwindling food stocks. 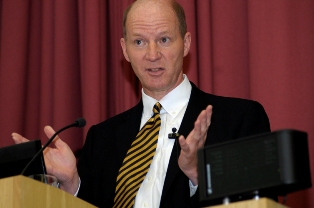 That was the message this week from leading environmental scientist Professor Michael Depledge in a keynote address at the University of Westminster.

Professor Depledge, an advisor to the University, said that urgent action was required as the earth was changing rapidly to become less suitable for humans. He cited climate change, dwindling food stocks, contamination and population ageing as the biggest issues facing mankind.

Universities have the potential to provide many of the evidence-based solutions to these problems through multi-disciplinary research, he suggested. Universities can become “the catalyst for change, providing new visions of society through their ‘thought leadership’,” he said.

Professor Depledge said: “The world around us is changing at an unprecedented rate. Rapid population growth, the ageing demographic, globalisation and anthropogenic climate change are posing challenges to all nations. How can we ensure that our societies survive and indeed flourish? Are there lessons from the past that can be learnt and where will new opportunities arise in the future?

“British universities have always played a part, both nationally and internationally, in helping us to understand the world in which we live through research and scholarship. They have also produced highly innovative thinkers and large numbers of well trained individuals who have contributed to our prosperity and to our influence in the international community. In times of great need such as during the First and Second World Wars, bright academics of all ages played vital roles in providing solutions to a wide range of threats.”

The audience on Monday at Professor Depledge’s lecture, entitled Universities in a changing environment, also heard Westminster Vice-Chancellor Professor Geoffrey Petts announce a new green initiative at the University to ensure it was in a position to “make a difference” by 2015.

He said the University was already working on research in areas such as transport, public policy, planning and water studies to support sustainability. But he said Westminster would undergo a “cultural change” to ensure it was able to play a full role in delivering “the evidence-based, multi-disciplinary solutions” required to tackle global issues.

Professor Michael Depledge is professor of environment and human health at Peninsular Medical School. He was Chief Scientific Advisor at the Government’s Environment Agency from 2002 to 2006 and a board member of the Natural Environment Research Council (NERC) during the same period. He began working as a visiting professor at the University of Westminster in the autumn of 2008.