Transport Lecturer named BikeBiz Woman of the Year and given Cycling Initiative of the Year award, all in one day

Dr Rachel Aldred, Senior Lecturer in Transport in the Faculty of Architecture and the Built Environment, was named as one of the 100 BikeBiz Women of the Year at the London Bicycle Show that took place on 12-15 February.

Dr Aldred was recognised for her contribution to cycle safety campaigns by conducting ground-breaking research with her ‘Near Miss Project’,

Dr Aldred said: “I’m delighted both to be on the BikeBiz list and that it grew from 50 to 100 women. Transport is still somewhat male dominated, so it’s great to see the cycling industry leading on recognising female involvement and achievement.”

The ‘Near Miss Project’ was also awarded the 'Cycling Initiative of the Year 2015' prize by Total Women's Cycling at the same event. The award-winning research aims to help everyday safe cycling in the UK through ‘one day diaries’.

The BikeBiz Women in Cycling List recognises women from the sport itself, from all areas of the industry and from advocacy bodies. The list is put together annually by industry magazine BikeBiz in association with The London Bike Show and Total Women's Cycling.

With 175 years’ of pioneering applied research, the University of Westminster’s research is at the forefront of exploring critical contemporary economic, societal and scientific issues. The Faculty of Architecture and the Built Environment received internationally excellent 3* performances in the Research Exercise Framework 2014. 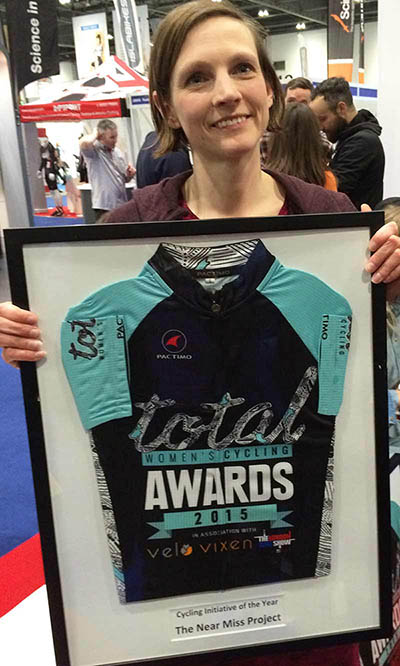