Westminster welcomed 27 new students who join the university as part of the international Chevening Programme to develop global leaders. 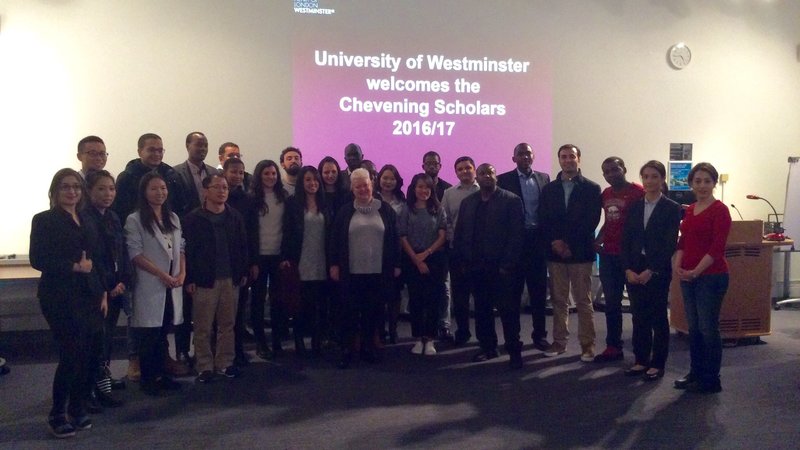 The University of Westminster hosted a welcome reception for the 27 new Chevening students who have started their studies in the 2016/17 academic year.

The students were welcomed by Deputy Vice Chancellor (Global Engagement), Professor Alexandra Hughes and Jenny Johnson from the Chevening Programme alongside the university’s International and Alumni Relations teams.

The students, who come from 23 countries across Africa, Asia, the Middle East, South America, Eastern Europe, the Caribbean and the South Pacific, were given the opportunity to network with each other to build their own personal global Chevening community at Westminster.

The university has historically hosted a significant number of students from the Chevening programme. In 2016 Westminster was recognised as 118th in the world for international outlook and was voted the most internationally diverse university in the UK and chose this year to mark the long term success of the Chevening programme by engaging with scholars both at the beginning and the end of their studies and to reaffirm its committment to the continued development of our global network of staff, students and alumni.

Welcoming the students Professor Alexandra Hughes said: “We live in an increasingly globally connected world and our global engagement is a core value of this university.

“Recently nominated the most internationally diverse of the UK’s universities, we pride ourselves on being an international and multicultural community of students, staff and alumni. You are now part of that community and we are delighted that you have joined it.”

Chevening is the UK government’s international awards scheme aimed at developing global leaders. The programme offers a unique opportunity for future leaders, influencers, and decision-makers from all over the world to develop professionally and academically, network extensively, experience UK culture, and build lasting positive relationships with the UK.