A new portrait of Lady Sorrell was taken by John Swannell at a portrait session attended by photography and photojournalism students. 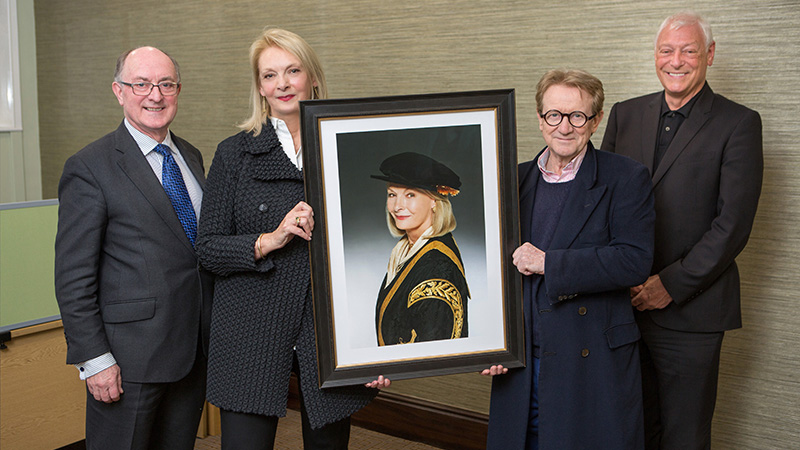 The official portrait was taken last summer by the renowned photographer John Swannell during a session at the Harrow based Westminster School of Media, Arts and Design. The photoshoot doubled as a master class as then current MA Documentary Photography and Photojournalism students Sona Gevorgyan, Blanilka Sadilkova, Jana Rajcova and Aya Watanabe attended the portrait session, together with Ben Edwards, Senior Lecturer, MA Documentary Photography and Photojournalism.

Lady Sorrell was appointed as the the University of Westminster’s new Chancellor in 2015. She is an inspirational education campaigner and businesswoman, and is co-founder and co-chair of the Sorrell Foundation. The Foundation was established in 1999 to foster confidence and creativity in young people.

John Swannell is one of the biggest names in British photography, celebrated for his consistently inventive work spanning nearly 40 years. He first worked as an assistant at Vogue Studios and to David Bailey before setting up his own studio, developing his distinctive style working for magazines such as Vogue, Harpers & Queen and Tatler. John was asked to photograph HM The Queen to celebrate her Golden Jubilee, and has officially photographed several other members of the British Royal Family. His work features in many permanent collections, including the National Portrait Gallery, V&A, MoMA, and the Royal Photographic Society.

Speaking about her appointment as Chancellor, Frances Sorrell said: “I’m honoured to have been appointed as Chancellor and delighted to join a University with a deeply held ethos around diversity and equality of opportunity. I am looking forward to supporting its work on student mobility and global employer engagement. I’m very excited about helping Westminster provide a springboard to future career and life success."