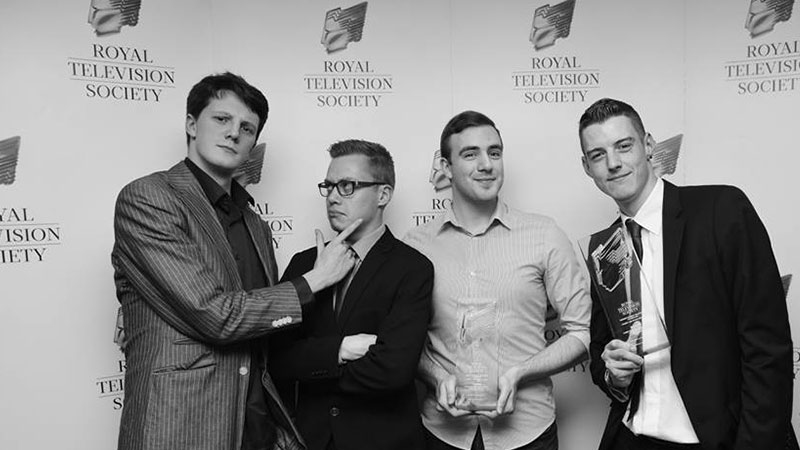 Students of the Television Production BA won the award for Best Comedy and Entertainment, for the sitcom ‘Roasted!’. The multi-camera pilot was scripted and produced by James Walshe, directed by Nathan Visick, edited by Benjamin Norton and the head designer was Catherine Hughes.

The final award received was in the Editing category.

Speaking about what he learnt at university, Jamie Walshe said: “I would say that the biggest way the University helped me in producing an award winning programme is instilling in me an ethos of freedom of expression and creativity, through the teaching of the lecturers, as well as the availability and quality of the equipment.”

Jane Thorburn, Course Leader on the Television Production BA said: "We were thrilled that the multi-camera studio sitcom 'Roasted!' won the Comedy and Entertainment category. The judges commended it for the high quality of the script, written by James Walshe, and the professionalism of the production.

Joanna Beresford, Director of Production at Avalon, added that: "the judges could see it being broadcast as a pilot for a television series. This is a fantastic recognition of the hard work, skill and discipline required to make a multi-camera show, and of the creativity of all the students involved."

The University of Westminster received seven nominations at the awards. In the Best Comedy and Entertainment category, the dark comedy ‘Boom Bang A Bang’, directed by Film BA students Jelena Krivosic, Ashwin Arvind, Isobel McConnell, Alice Trott and Hana Ishikawa was up for nomination. There was also a nomination in the Drama category for ‘Offside’, directed by Ellie Gocher, Jimmy Dean, Martin Jensen and Sophie Thompson.

Find out more about our Television, Film and Moving Image courses.