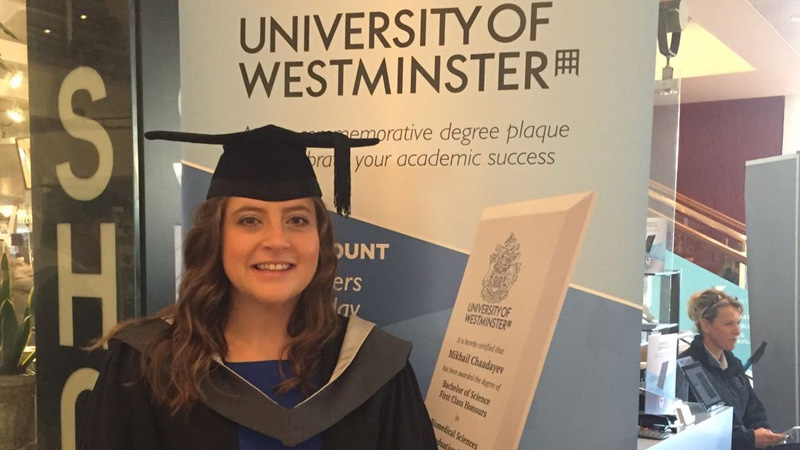 Carolyn graduated in 2016 with Distinction. She was the lead author for the study which found that more than a third of patients at risk of developing type 2 diabetes avoided developing the condition after they were referred by their GP to a diabetes prevention programme delivered by Weight Watchers. The initiative helped more than half of those referred either to reduce their risk of developing diabetes or to get their blood sugar levels back to normal.

The research paper - led by Carolyn and co-authored by Agnes Marossy, Zoe Griffiths and Westminster Senior Lecturer in International Public Health and Nutrition Dr Amanda Adegboye - was published in the peer-reviewed BMJ Open Diabetes Research & Care journal. It then went on to achieve extensive media coverage in broadcast, national, regional, trade and consumer news outlets including in The Daily Telegraph, The Times, The Sun, Daily Mirror, Mail Online, The Independent, i newspaper, Press Association, Sky News, LBC radio, BBC Radio 2 and others.

Sky News provided a positive overview of the findings, and included key statistics from the press release also quoting Carolyn and detailing the problem of diabetes in the UK. The programme highlighted that organised weight management programmes won't work for everyone, but GPs and teams continue to play a pivotal role in managing diabetes. The coverage was also reposted to Yahoo.

After interviewing Carolyn, The Times went on to detail the results of the study in an article. The piece included the interview and Carolyn was quoted saying that the GP-patient relationship was at the forefront of being able to recommend patients to Weight Watchers. This article was also posted to The Times Online and The Times Scotland.

Read the full article in The Times.