The Rt Hon Mark Field, MP for the Cities of London and Westminster visits the Regent Street Cinema

Following its opening last year, the University of Westminster’s Regent Street Cinema has been attracting visitors and film lovers from all over the city. Mark Field, who has been serving as MP to the Cities of London and Westminster since 2001, was invited to Regent Street to view the refurbished birthplace of British Cinema - made possible by a £1.5million Heritage Lottery Fund (HLF) grant - by Stuart Hobley, Head of Heritage Lottery Fund, London. 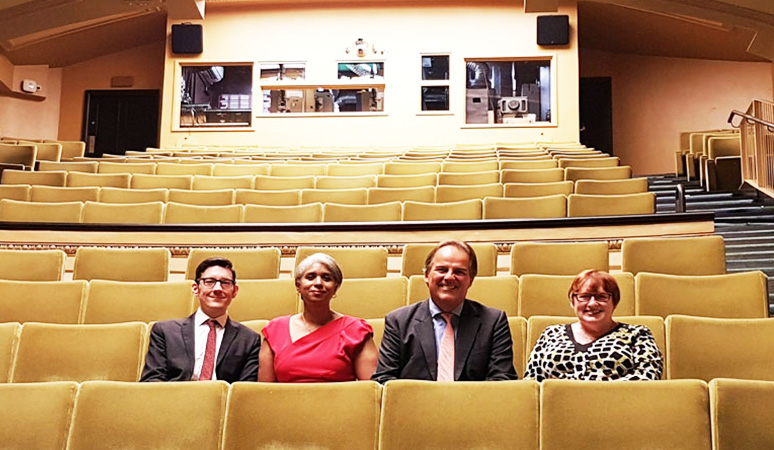 After 35 years, the Regent Street Cinema opened its doors to the public again last year. The support received from Heritage Lottery Fund and other donors, including the Quintin Hogg Trust, has enabled the University of Westminster to complete the restoration and bring the Cinema back to life, benefitting the community and providing a chance for students to showcase their films in the heart of the West End.

MP Mark Field said: "It’s been a real pleasure to see how National Lottery player's money has helped to transform this historic Cinema, making it once again, one of London's leading film venues. Thanks to the University, Regent Street Cinema is not only supporting students, but reaching out and inspiring young people right across Westminster."

In addition to a diverse and stimulating programme for all, the Regent Street Cinema engages school and community groups through its regular Wednesday Classic Matinees and Saturday Kids’ Kino Club. In June 2016, the Cinema showcased work of University of Westminster students from the award-winning Film and TV Production BA Honours and BA Contemporary Media Practice courses screening short and experimental films, documentaries and animations.

Housed within the Polytechnic Institution - predecessor to University of Westminster, on London’s Regent Street, the Cinema demonstrated moving pictures to the public for the first time in 1896 with a showcase of the Lumière Brothers’ Cinématographe. As the inaugural venue in the country to showcase moving pictures it became a huge attraction for the public with films playing 10 times a day.

Find out more about the Heritage Lottery Fund here.