Lewis Dartnell, astrobiology researcher and Professor of Science Communication at University of Westminster, gave a keynote lecture at the Jijki Festival’s Golden Seed Live Show in South Korea about Jikji, the first printed book in the world. Professor Dartnell was invited as the highlight of the show given the enormous success of his book “The Knowledge” which looks at how to reboot civilisation from scratch after an apocalypse. 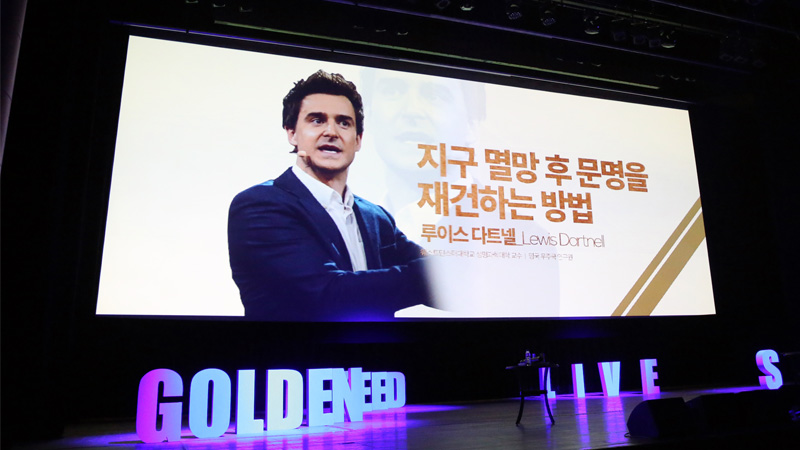 The Jikji Festival in Cheongju, South Korea, takes place every other year to celebrate the first printed book in the world, Jikji. The book was made using metal moving type printer tool in a Buddhist temple eighty years before Gutenberg started printing in Germany, and in 2001 it was recognised as the oldest book printer. The Jikji Festival is a huge international celebration of literature, art, culture and science.

Professor Dartnell said: “For my show, I talked about the thought experiment in ‘The Knowledge’, and how you could go about rebooting civilisation from scratch after an apocalypse — namely, what are the most crucial scientific discoveries and technological inventions from our own history that enabled us to build the modern world, and how could you accelerate the process a second time around.”

‘The Knowledge’ which is now translated into Korean is all about the behind-the-scenes fundamentals of how our modern world works, including how things are made, and what key transitions enabled civilisation to progress across the centuries and millennia of history.

For his book Professor Dartnell pursued deep research into making things from scratch by himself. He worked in a traditional 16th century blacksmiths by open hearth and hammer and anvil. He made glass by collecting the raw materials, and photographs by mixing together the simple silver-containing chemistry.

During his trip in Korea Professor Dartnell also visited a master workshop to learn how metal type casting was done traditionally by using the wet sand mound, furnace and pouring molten metal and how the first metal moveable printer was created.

Learn more about Professor Lewis Dartnell and his book The Knowledge.