The Department of Psychology within the Faculty of Science and Technology marked World Suicide Prevention Day on 5 September by hosting an event aimed at raising awareness about suicide and self-harm in probation settings. 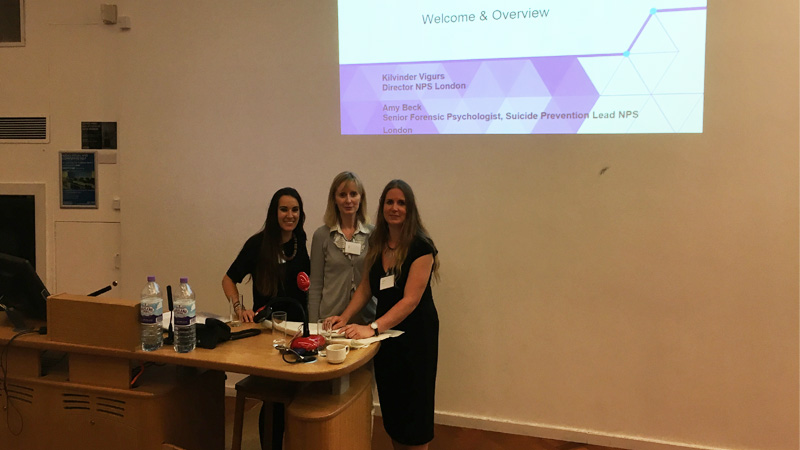 The event called 'Saving Lives: New Approaches to Suicide and Self-harm Prevention in Probation Practice' was organised by the University of Westminster’s Department of Psychology, in collaboration with partners from the National Probation Service London.

Funded by The Sir Haley Stewart Trust, a grant-giving foundation concerned with the development of people’s mind, bodies and spirits and focusing on supporting innovative research projects, the event was free of charge and gave 150 probation practitioners from across the National Probation Service the opportunity to attend research talks and participate in up to two interactive workshops.

Keynote speakers with expertise in various areas shared their experience and presented research on themes like understanding suicidal behaviours, reflecting on how a prison environment and experiences may be affecting these behaviours and others.

Attendants were able to choose from five workshops, which covered the topics Risk to Self from a Personality Disorder Perspective, Different Perspectives on Recall: the key to collaborative recall practice in suicide prevention, The importance of staff welfare in working with suicidal/self-harming service users, New Suicide Prevention Initiatives in Probation Approved Premises and Suicide Prevention: Transitions in and out of Custody and were all aiming to encourage conversations about suicide and self-harm between probation staff and probation service users.

The event was also attended by a number of charity organisations, including the Samaritans, NSPA, The Listening Place, PAPYRUS and SSAFA.

Speaking about the event, Dr Jay-Marie Mackenzie, Senior Lecturer in the Department of Psychology and one of the organisers of the day, said: “I feel very lucky to have had the opportunity to plan and run this event. Myself and collaborators at the National Probation Service London hope that by attending this event Probation staff will feel more confident in talking to their Service Users about suicide and self-harm, which can be a difficult topic to discuss.

“We also hope that this event will encourage others to talk about suicide and suicidal feelings more openly, and perhaps run their own event to recognise World Suicide Prevention Day on the 10th of September.”

Dr Jay-Marie Mackenzie also wrote an article for The Conversation on how to help offenders on probation who are at high risk of suicide, noting that probationers often want someone to listen to them in a non-judgemental way when they are feeling suicidal.