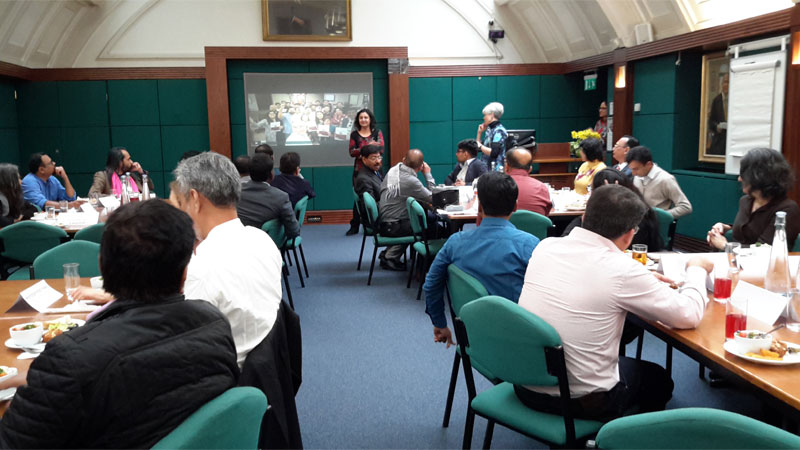 The programme, funded by the Foreign and Commonwealth Office’s Chevening fellowships initiative, has been run by Professor Jean Seaton and Professor Rosie Thomas from the School of Media, Arts and Design and is now in its sixth year.

On Tuesday 27 March, the pioneering programme – the only FCO fellowships programme to bring Indians and Pakistanis together – officially kicked off with a lunch event where the 17 journalists were welcomed to the University. The reception also included the Head of the Urdu service at BBC World, a group of visiting vernacular Indian journalists on an FCO briefing, as well as members of both the FCO and the Chevening Secretariat.

The eight-week fellowship enables South Asian journalists to deepen their understanding of the role of the media in a changing world, as well as exposing them to the best of British media practices, institutions, art, culture and civic voices, including a two-day visit to see devolved government in action in Wales. It will culminate in a symposium which the participants will design and organise at the Institute for Government, inviting high profile speakers to discuss challenges of the day with an audience of journalists, government ministers, think tankers and others from across the UK.

This year’s theme will explore the question of ‘Meaningful Future Democracies’ and will focus on the institutions and values that are needed to make electoral choices effective. Participants will be asked to examine and discuss the role of the media in ensuring better and more meaningful democracy.

Speaking about the programme, Professor Rosie Thomas said: “It is an immense privilege to run this exciting programme for the FCO and to spend eight weeks in discussion with interesting journalists from across South Asia: we always build new understandings across all our societies

Professor Jean Seaton said:  It’s a thrilling and demanding opportunity to look at the best and worst of Britain and British institutions to find common ground and common lessons with South Asia.”

Smita Nair, one of the Chevening participants who works for The Indian Express, said: The course is not just restricted to the classroom. On the second day I saw myself sitting next to a Pakistani classmate and discussing our common culture, our love for poetry and food. Borders stood blurred. It also helped me break some biases in my head of my neighbouring nations.

“We also come to UK in a very dramatic year, with Cambridge Analytica putting the focus back on algorithms and influencers and it helps to understand the way the press in UK have probed it, all this while sitting inside our classroom at Westminster. The classes have some great Professors simplifying theories as complex as democracy and extremism and even taking time to ideate on how to study politics and look for humour in places one would least expect.”