A team of first year students from the Westminster Business School have reached the final of the University Business Challenge – a nationally recognised competition that has been running for 18 years, making it the longest running business simulation competition. 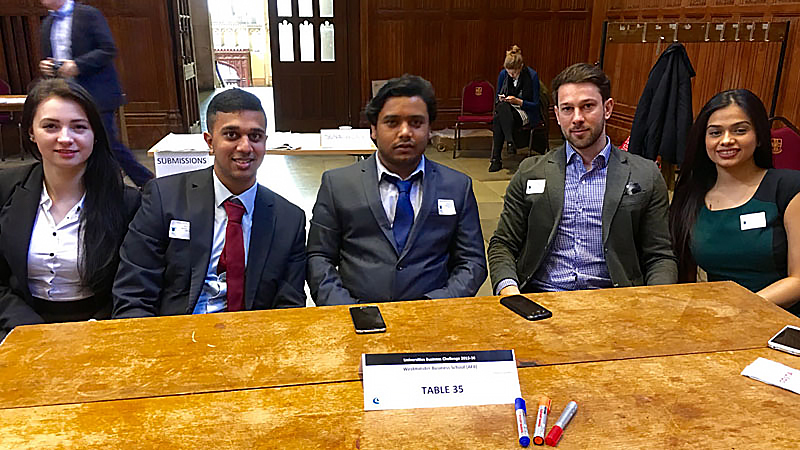 The competition began last September with 291 teams competing in a six-week business simulation game. After stage one only 90 teams were selected to take part in the semi-finals and battle it out for a place in the grand final.

Westminster Business School students took part in the semi-final held at the University of Bristol, containing 40 teams, with only 4 being selected to progress to the final. Despite starting university only last September, the team of first year students from Westminster Business School came third in their semi-final, meaning they secured a place in the final at IBM headquarters on Thursday 17 March.

Speaking about the competition, Trevor Gomes said: “Reaching the final of the University Business Challenge is a remarkable achievement, considering we are first year students who competed against students who had much more experience.

“I feel it is a massive achievement to get to the semi-final, let alone the final. But we go into the final with one desire and that is to win.”

The teams were coached by Karen Kufuor, Principle Lecturer in the Department of Economic and Quantitative Methods. Speaking about the success, Karen said: “I am extremely proud of both our semi-finalist teams. When I realised our team of first year students had secured third place and with it a spot in the final it was absolutely amazing.

“I can’t wait for the final on Thursday. I know the team are ready and determined.”

As part of the University Business Challenge, all the universities had to raise money as part of the charity challenge. The University of Westminster raised the most money, with all the teams managing to raise £2,729.65 for Ezimbidlene School in South Africa.

Congratulations to all the students in the final, and we wish them the best of luck!

The final takes place at the IBM South Bank on 17 March.