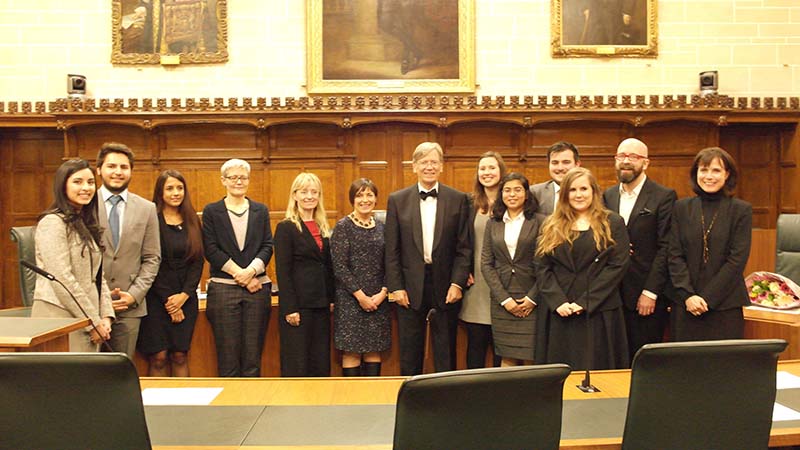 Third-year law students Matthew Yardley and Maria Matias won the prize. They each received a £100 cash prize and will see their names engraved onto the Godfrey Cole Mooting Shield.

The other finalists were first-year student Oishee Dey and second-year student Michelle French who also received a cash prize of £50 each. Both teams were awarded certificates for their achievements in the competition.

The final of the competition was judged by Lord Carnwath, who is a judge in the Supreme Court. The Supreme Court selects just nine institutions to host moots every year and this year the University of Westminster was one of the universities selected. Other rounds of the competition were judged by lawyers from Westminster Law School and three law practices, Mischon de Reya, 33 Bedford Row and 4 Brick Court.

The event was organised by Marc Mason, Senior Lecturer at Westminster Law School, and Farah Ali, Mooting Officer with Westminster Student Law Society, who is in her final year of law. Speaking about the event, Marc Mason said: "Having the final of the moot hosted by the Supreme Court provided an amazing experience for the students, who had a rare opportunity to test their advocacy in front of Lord Carnwath, who is one of the 12 most senior judges in the UK.

"Matthew and Maria clearly impressed him with their presentation and arguments to win the shield, but all four finalists performed exceptionally well."

Farah Ali commented on her experience: "I wanted to organise a prestigious and memorable mooting competition this year for the university, which surpassed previous standards. I am pleased to say that this is one of the best mooting competitions the University has conducted."

The competition was facilitated by fortnightly mooting workshops, which engage students in mooting and encourage them to participate in competitions. Marc and Farah both believe that the University has raised the standard of mooting competitions this year significantly, and expect that this standard will be maintained, if not exceeded, in the years to come.

The University of Westminster has had more success in mooting, with Matthew Yardley, Oishee Dey, Amina Altaf and James Bolton finishing in the top eight at the LSE-Featherstone Sexual Orientation and Gender Identity Moot.