With interesting facts and in a humorous manner, Sir Anthony Seldon presented all 54 Prime Ministers of the United Kingdom in the latest Westminster Talk, part of the series, featuring an outstanding array of speakers who share history with the University of Westminster. 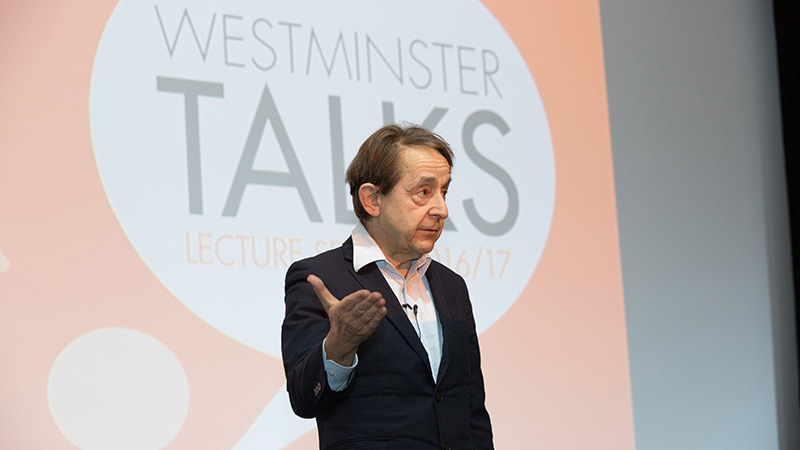 Sir Anthony Seldon, an MBA alumnus from the University of Westminster, is currently a Vice-Chancellor of the University of Buckingham and a leading contemporary historian, educationalist, commentator and political author.

Going back to 17th century, when Sir Robert Walpole became the first Prime Minister of the United Kingdom, Anthony Seldon traced all major figures in the history of British politics until today, including Prime Ministers and Cabinet Secretaries.

In just 45 minutes, Anthony Seldon also managed to touch on social and technological issues, in relation to politics, by emphasizing the importance of the right education to become a head of the British government and describing how technological changes have influenced the Prime Ministers’ offices.

Trying to solve what he called ‘the riddle of 10 Downing Street’, Anthony Seldon humorously outlined the requirements needed to take up the position of a Prime Minister, after which a Q&A session followed.

The event was closed with a short speech by the Vice Chancellor and President of the University of Westminster, Professor Geoff Petts, who expressed his gratitude to Sir Anthony Seldon for the delivery of an insightful talk.

The next Westminster Talk will take place on 29 March with Professor Michael Neuman talking about The Power of London’s Hidden Flows.

Find out more and book a free place.