The University of Westminster’s Department of Engineering and the Outreach Team was honoured to partner with the Institute of Electrical and Electronic Engineers (IEEE) UK and Ireland Section’s annual Members Open Day by hosting an open day of STEM activities on Saturday 7 October. Students of all ages, interested in exploring some of the innovations in technology that are shaping our future, were welcomed to the event. 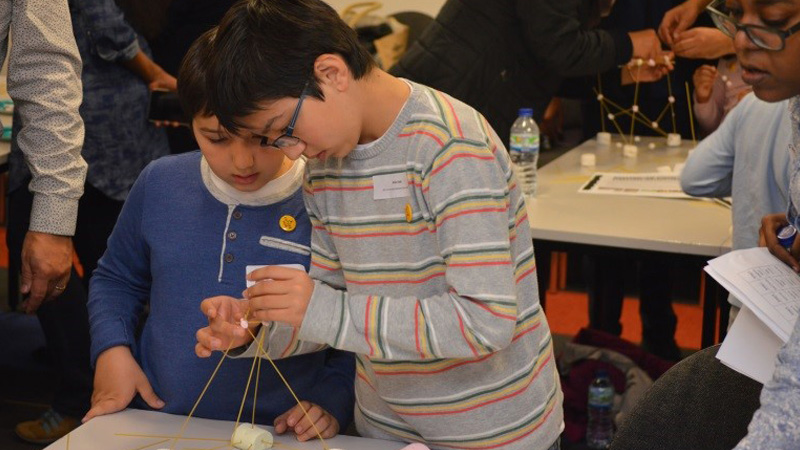 The University of Westminster’s Department of Engineering and the Outreach Team was honoured to partner with the Institute of Electrical and Electronic Engineers (IEEE) UK and Ireland Section’s annual Members Open Day by hosting an open day of STEM activities on Saturday 7 October. Students of all ages, interested in exploring some of the innovations in technology that are shaping our future, were welcomed to the event.

As one of the leading organisations on a global level IEEE is currently active in over 160 countries in all fields from medical electronics, power and energy to computing and communications engineering, with over 11,000 members in the UK and Ireland. Some of these topics were presented to the participants on the open day.

STEM activities included a short lecture on Collision Detection, with children having fun in trying their hand at building circuits from an easy to understand intuitive perspective and gaining the satisfaction of seeing their ideas and creations come to life and work using Snap Circuit. Students along with their parents also learnt about the exciting part of Mathematics that is at the heart of all Engineering and Technological breakthroughs and how it is applied in the creation of video games. They were composed a construction challenge using simple tools/ingredients such as Spaghetti and Marshmallow candy where they had to create a construction taking into consideration the laws of physics, especially gravity, to create a perfectly balanced tall tower.

Over in the Spark Lab section, the list of projects included making an innovative plan to clean up the ocean from pollution, learning how to connect wires to making circuits that use the power of electricity and many more.

There was also an opportunity to dive into the world of virtual reality (VR), which even parents could not resist to try.

While queuing for the activity, the young brothers, Matthew and Sean Scholand from the Finchley Catholic High School said: “We liked each one of the activities and we especially enjoyed building a net to catch and remove the plastic from the ocean. We can’t wait to get our try on the VR device afterwards.”

The visitors saw demonstrations in robotics where finalists on the IEEE UK and Ireland Section’s Robotics Challenge, themed “Robotics for Humanity”, were presenting to a panel of IEEE experts. Here they had the chance to follow the process of robot creation and to touch real robot prototypes.

The University of Westminster’s Outreach Team along with tutors, lecturers and student volunteers from the University and the IEEE were there to support the visitors and to answer all of their questions on Engineering and Technology throughout the event. A camera crew from the BBC also covered the event.

The IEEE focused activities were hosted and facilitated by the University’s Department of Engineering where the highlight of the event was the plenary lecture entitled “From ARMs to Brains” by Professor Steve Furber, which was also attended by the IEEE Region 8 Director Margarita Ericsson. The whole event was Webcast live to the entire membership from the Large Lecture Theatre on Cavendish Campus of the University of Westminster.

Learn about the University of Westminster’s Faculty of Science and Technology.