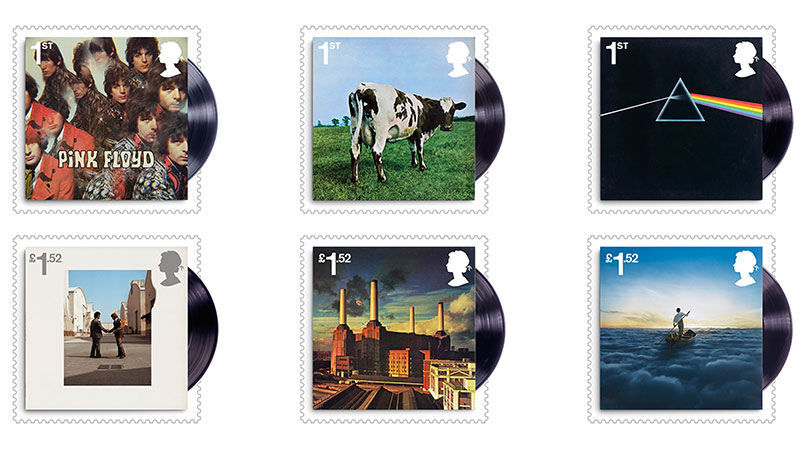 While studying architecture between 1962 and 1965, Roger Waters, Nick Mason and Richard Wright met and formed the band. Originally called Sigma 6, they first performed in the common room and at student parties.

The 10 stamps revealed today will be issued to mark 50 years since Pink Floyd turned professional and became the ‘house band’ of the London Underground movement of music and arts. Few bands have managed to carve out a career as rich and expansive as that of Pink Floyd. From their blues-based psychedelic roots, the members of the outfit have created some of rock music’s most totemic and inspirational albums, with ground-breaking live performances to match.

The band is renowned for its innovative album covers, many of which are regarded as design classics. Most of the band’s album covers were devised by Hipgnosis, co-founded by Aubrey Powell and Storm Thorgerson in 1968. They were at the forefront of album cover design, using experimental techniques in photography and multiple exposures, and retouching to create startling, iconic images.

Six stamps feature album covers: The Piper At The Gates Of Dawn, Atom Heart Mother, The Dark Side Of The Moon, Wish You Were Here, Animals and The Endless River. A further four stamps within a miniature sheet celebrate the band's live performances. One of the most visually literate bands of all time, they were among the first groups to make extensive use of light shows and projection of films for their appearances, which increased in ambition over the decades.

In 2015, members Roger Waters and Nick Mason unveiled a Regent Street Heritage Plaque to mark the Regent Campus of the University of Westminster (formerly Regent Street Polytechnic) where they met.

In a recent interview with the two, Nick Mason said: “Studying at the Regent Street Polytechnic introduced me to some of the key people and biggest collaborators in my career, many of whom I have been lucky enough to work with over the last 50 years. Three of the founding members of Pink Floyd met there so in essence we were formed under the roof of the Polytechnic. We rehearsed in the common room in the basement and played some of our first performances there. Not only did studying architecture give us an invaluable introduction to art and technology, but it also gave us an opportunity to develop, through what would now be called a ‘government funded initiative’ but was then called a ‘student grant’. We are of course honoured to be recognised in this way and I have to add astonished; it was unclear in 1965 that a life time in music beckoned.”

The Royal Mail Pink Floyd special stamps are available to pre-order from 26 May at www.royalmail.com/pinkfloyd. The stamps will also be available to buy in 8,000 Post Offices from 7 July 2016.