Review of The Shaken and The Stirred

On 13 October, a joint collaboration between the Centre for Law Society and Popular Culture and our friends in English Linguistic and Cultural Studies took place. 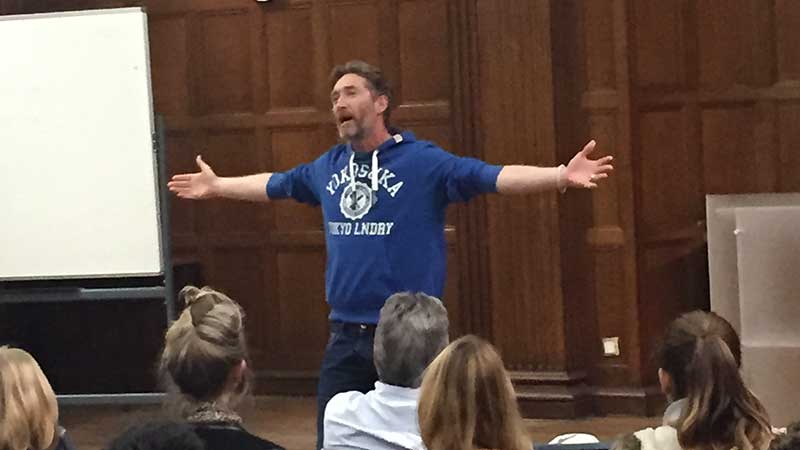 This was led by Mike Garry, pictured below opening the evening, who is Writer in Residence and Associate Fellow of the Centre. This was a well attended and very enjoyable event and we are very grateful to Mike for organising it and to Catherine, Ian, Steven and Jeanette for agreeing to perform their poems. Thanks also to Matt Morrison and David Cunningham for all their help and cooperation here. One of Matt’s brilliant students on the BA Linguistics & Creative Writing course, Mette Hyllested, kindly supplied this perceptive and superbly written review of the evening:

You know you have arrived in the right place when the host poet of the night, Mike Garry, proclaims that he doesn’t really like poetry readings, he finds them a bit boring, but tonight the booze is free so at least that’s something. A light shuffle in the seats washes over the russet wood panelled Fyvie Hall, I already have my glass of wine, perhaps I should get another? Five minutes later and well into Mike’s incredible performance it becomes obvious that that won’t be necessary – this evening is going to be far from boring.

Jeanette Lynes is the first of the four Canadian poets from the group The Shaken & the Stirred to go on stage this evening. Her Bedlam Cowslip is an ode to the English poet John Clare. The whimsical tone of Clare’s antics is delivered with such love for the man who went insane, that you can’t help but adore the innocent portrayal she has created of him. Especially the star struck ‘Another Brush With Keats’ anchored itself firmly in my heart as the almost childish tone of admiration for Keats lets us into John Clare’s eternally positive world – a world where he is not mad and therefore we are not mad – and thus we feel such compassion and relatability.

Bringing us up to present day is Steven Heighton’s hauntingly accurate description of the ambivalence in watching your child grow up. He sees the details, the small steps, the minor victories, and losses, on both sides. He notices the everyday slip. In the poem ‘Constellations’ the vivid depiction and many layers of a child plucking fluorescent stars down from her ceiling only to stick them onto herself and form a new constellation blew me away (and for a moment I was homesick to the core).

Luckily the anticipated wine break scatters thoughts and we can for a moment drown our sorrows or laughter…at this point it’s hard to tell…everyone is enjoying themselves! As I look around the hall an odd feeling strikes: the setting is not quite ‘pub’ though it has the joyful clinking of glasses and the brutal outbursts of laughter, not quite ‘performance space’ despite the décor of wood panelled walls and herringbone parquet, but with the plastic chairs from hell and the too bright lights above making me think I should be taking notes and not sipping my wine. I should probably also sit up straight, but that’s boring and we’re out of hours. This is university out of hours: slightly askew.

When Catherine Graham steps up to the podium after the break she actually steps down in order to “be with us”. And she is, right there, taking us by the hand back through her memories of an awkward childhood with all its neuroses of mashed potato frolics and playground politics. Executed with a lightness that only makes the heart ache even more at this lonely child. I could almost taste the mashed potatoes.

The evening’s last poet, Ian Burgham, blasts on to the podium in a flurry of different books. He wants to read from all of them and so he switches erratically between his collections. His darkest and newest collection of poems is called Midnight, but Ian doesn’t dwell on his sombre poems. In fact he makes those poems sing with laughter despite them being tragic and full of heartbreak. It’s the way he delivers them, in a rush as if he’s not sure we’re ready for this level of deepness, as if he’s afraid he might “drag the night down”, but he has nothing to fear as his words spark inspiration, and I can’t get up quick enough to shake his hand and to make him retell the first line of one of his poems. But by the time I get to him the poem and the first line has evaded me in the illusive way that only a train of thought can behave, so I just end up shaking his hand and congratulating him on a great evening. The icing on the cake is when Ian runs out the door as if he’s late for the bus, but then comes back two minutes later and gifts his book to a very lucky fellow student in a fluster of “because I want to…and I like you…you’re great” before he then hurries away with the wind.

And that sums up the night: a whirlwind of a night! I didn’t know what to expect. Probably something along Mike Garry’s initial line, but as he and the Shaken & Stirred gang proved poetry is far from dull. In fact, we are only able to deal with the heartache and depth in these poems because of the casual humour these fantastic poets have put into them with such finesse. They were tangible, delicate, funny, wild, and wonderful. All with distinct styles, and all brought to life with exceptional deliverance. If you get the chance then go see for yourself!