On 12 July 2017, alongside a cohort of new graduates, The University of Westminster recognised Sir Richard Arnold for his services to Law and for his contribution to Westminster Law School. 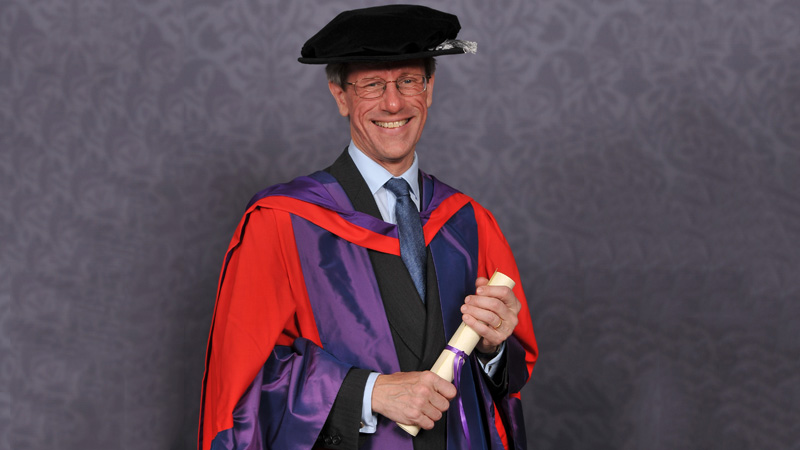 Sir Richard Arnold was educated at Highgate School and went on to study Chemistry at Magdalen College in Oxford, obtaining his Diploma in Law (Dip.Law) in 1984 from the Polytechnic of Central London, now the University of Westminster. He was called to the Bar of England and Wales in 1985 and became a QC in 2000.

Appointed to the High Court Bench in October 2008, Sir Richard specialised in intellectual property, entertainment and media law, and data protection, both domestically and in European Courts and Tribunals. He was Chairman of the Code of Practice for the Promotion of Animal Medicines Committee from 2002 to 2008, an Appointed Person hearing trade mark appeals from 2003 to 2008 and a Deputy High Court Judge from 2004 to 2008.

He was appointed to be Judge in Charge of the Patents Court in April 2013 and as an External Member of the Enlarged Board of Appeal of the European Patent Office in March 2016.

The University of Westminster recognised Sir Richard for his contribution to Westminster Law School as a key Associate Fellow of the Centre for Law, Society, and Popular Culture. He has also generously donated to Westminster’s 125 Fund, a bursary scheme for Westminster Students enabling them to undertake projects and activities that enhance their employability and help them to achieve their full potential.

In his acceptance speech, Sir Richard Arnold said: “I would like to begin by thanking the University of Westminster for the great honour it has done me by conferring an honorary Doctorate of Law. It is also this University that I have to thank for setting me on the path that led me to this point. In the space of just one year, I was given a foundation in law that not only enabled me to succeed in my careers, but also sparked a wider interest in the subject which has remained with me until now.”

Professor Andrew Linn, Dean of the Faculty of Social Sciences and Humanities, said: “We are delighted to be able to cement our relationship with a true friend of this University, an eminent scholar in his field as well as a leading barrister and judge.”