The First Deputy Rector of WIUT, Alan France, has been awarded an OBE by Her Majesty The Queen on 1 January 2011. 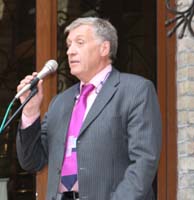 The First Deputy Rector of Westminster International University Tashkent (WIUT), Alan France, has been awarded an OBE by Her Majesty The Queen in her New Year’s Honours List, for services to educational and cultural relations between the UK and Uzbekistan. The announcement was made on 1 January 2011.

The British Ambassador to Uzbekistan, Mr Rupert Joy, said “This award is a fitting recognition of all the work that Alan France has done over the past 9 years, together with the rest of the leadership team at WIUT, to build the university into one of this country's leading educational institutions”.