The Hubb, which derives from the Arabic word for love, is the first project of AWMA Design Studio, established by four creatives from diverse backgrounds and fields. 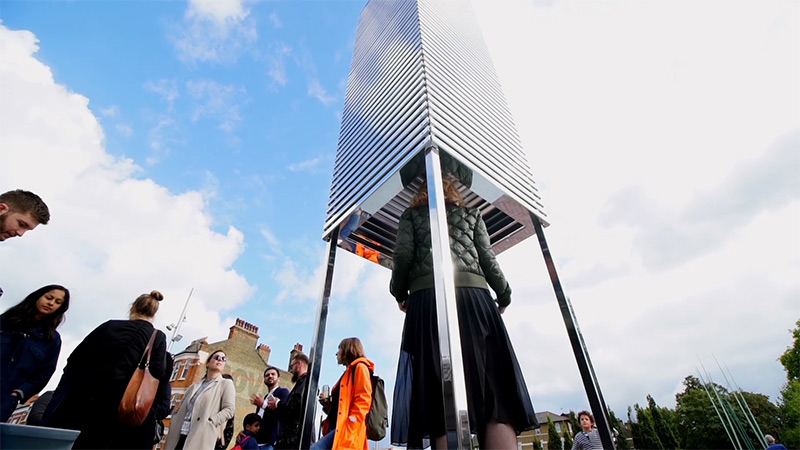 In the Islamic community, the mosque plays the role of a hub and the minaret is an architectural device that facilitates a person at the top calling the local community for individual reflection and congregational gatherings for good.

Inspired by this idea, the Hubb, which is on display at the Brixton Design Trail in Windrush Square until 24 September, is a reflective structure that takes the traditional concept of a minaret and flips it, replacing the vocal call to a visual call to bring a community together.

The ground is activated with an opening, inviting people inside the minaret to reflect in solitude and share the power of love and understanding.  The internal experience of the structure is enhanced by spatial geometry, scriptural engravings and audio composed by Yusuf Islam aka Cat Stevens. After the nine-day festival, the Hubb installation will be touring several mosques in the UK.

The AWMA Design creative team came up with the idea of Hubb in March at a mosque en route to the Barbican’s exhibition on Japanese Houses, which followed a trip by the group to Japan and South Korea. The concept of the Hubb was a culmination of the designers’ paths with the collaboration being shaped by their city, their faith and their creative curiosity.

AWMA designers Mohammed Rahmany and Abderahim Elmanani both studied in DS13 on the Master of Architecture (MArch) (RIBA Pt II) at the University of Westminster. Wasim Khalfey, also a member of the AWMA team graduated from the Architecture BA Honours and Arberor Habderi attended University of the Arts, London.

Remembering his studies, Mohammed Rahmany said: “Being taught by some of the great tutors at the University of Westminster, especially Andrew Yau and Andrei Martin, has definitely helped us be where we are today - their methods of teaching have shaped our way of thinking and how we question design, architecture and other aspects of the socio-economic and cultural matters round us.”

The studio has already started working on two new Lambeth based projects - a soup kitchen and a social enterprise space.

Click here for a video from the opening day of AWMA’s Hubb project.