Professor Sadie Morgan, Professor of Interior Architecture, won the award at this year’s AJ100 awards ceremony on 19 June at the Tower of London. 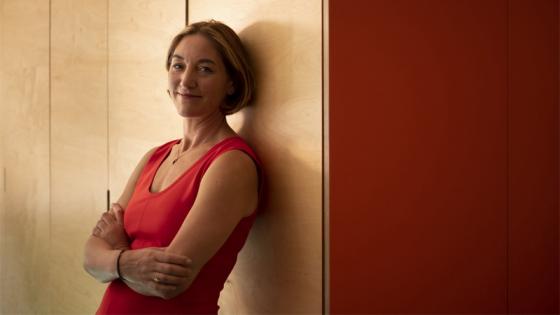 Professor Morgan was given the award because of her outstanding contribution to the industry by promoting the value of good design and being involved in conversations outside the architectural world.

Alongside teaching at the University of Westminster and being the Director and Co-founder of RIBA Stirling Prize-winning practice dRMM, she is widely involved in a number of advisory roles. These include being the Chair of the Independent Design Panel for High Speed Two, Commissioner and Chair of the National Infrastructure Commission Design Group and Mayor’s design advocate for the Greater London Authority’s ‘Good Growth by Design’ agenda.

She is also non-executive Director of the Major Project Association and of U+I to oversee delivery of their commitments to community engagement in public-private partnership (PPP) projects. Most recently, she was in the early stages of setting up a Quality of Life Foundation to encourage developers to prioritise wellbeing in their projects.

Speaking about her success, Professor Morgan said: “I’m honoured to be recognised for my contribution to the profession, especially as this award has been voted for by my peers.

“When Alex, Philip and I founded dRMM, we set out to create architecture that was innovative, high quality and socially useful, bound by an aspiration to improve people’s lives. The belief that good design can be transformative has been integral to both my professional practice and advisory roles.

“I am incredibly grateful and privileged to work in a profession where you can make a genuine difference in people’s lives. By helping government to think creatively, to question the norm, the profession can regain the initiative and build an environment that is fit for purpose, designed for the needs for all and are not wasteful of the world’s resources.”

The AJ100 is a ranking of the largest architectural practices in the UK and the most innovative and successful ones are announced at the annual gala dinner and awards ceremony. With 13 award categories, the AJ100 has been published annually since 1995 and offers a snapshot of architectural practice.

This achievement follows Professor Morgan’s win of the inaugural Female Architectural Leader of the Year Award at this year’s Building Design Awards presented at a ceremony on 1 May.