Pioneering Modernist Architect, and alumnus of the University of Westminster, Michael Manser, passes away

Award-winning architect Michael Manser, known for his pioneering Modernist houses and as the founder of the Manser Medal, has died aged 87. 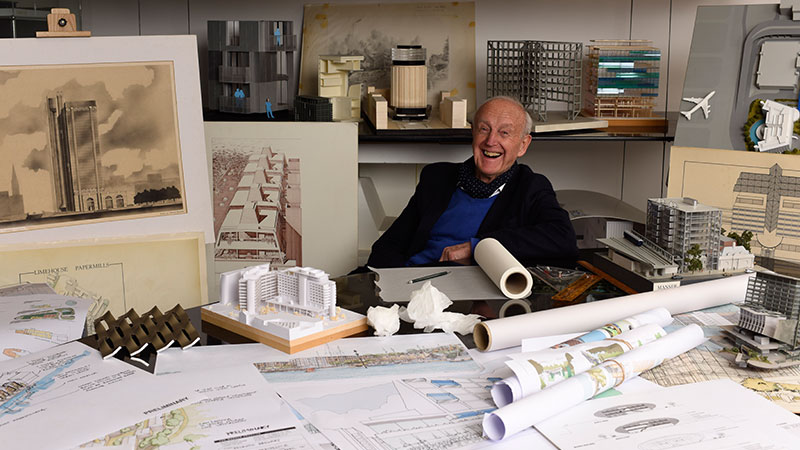 Born in Bristol on 23 March 1929, a young Michael Manser’s interest in architecture was encouraged by family friend and architect Reginald Vaughan who recommended that he study at the Regent Street Polytechnic, now the University of Westminster.

After qualifying as an architect and spending some time working in the West Indies for Norman & Dawbarn, Manser went on to establish his own practice, Michael Manser Associates in 1961. He became architectural correspondent for the Observer and the monthly magazine Architectural Design. Manser was also President of the Royal Institute of British Architects (RIBA) during 1983-85. He was widely recognised as an innovator, educator, writer and leader in the profession.

Manser undertook successful large commissions such as his Heathrow Hilton hotel near Terminal Four (1990) which won praise from the author JG Ballard for its large atrium, resembling “a planetarium in the way that it salutes the skies above the roof”. His glittering steel frame and glass terminal building at Southampton Eastleigh airport (1994) was described in The Observer as looking “magnificent from the air…interesting from the ground…[and] positively awesome from within.”

Speaking about Michael Manser, Acting Dean of the University of Westminster’s Faculty of Architecture and the Built Environment Dr Harry Charrington said:

“Michael Manser was a straightforwardly good architect; and all you could wish for in a designer and associate. He produced particularly beautiful houses, and some fine public buildings, and he resisted infamous slurs against the work of his colleagues and his profession politely and firmly.”

Michael Manser was awarded a CBE for services to architecture in 1993.

Find out more about Michael Manser and The Manser Practice.