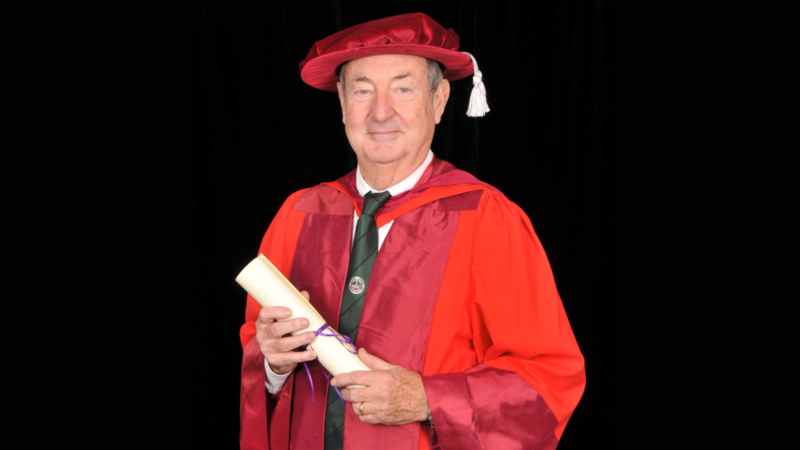 Fifty years after he first enrolled on the Architecture course at the Regent Street Polytechnic, now known as the University of Westminster, Pink Floyd drummer Nick Mason is heading back to collect the degree he never got to complete. The University of Westminster is to award Mason an Honorary Doctor of Letters in recognition of his significant contribution to the music industry over the last fifty years.

Nick Mason joined the Regent Street Polytechnic, the forerunner to the University of Westminster, in 1962 to study Architecture. While there he met fellow band members, Roger Waters and Richard Wright and as the band went on to achieve international acclaim, the demands increased and Mason was forced to drop out of his course before he could complete his final year studies.

Reliving his student days, Nick Mason said: “Studying at the Regent Street Polytechnic introduced me to some of the key people and biggest collaborators in my career, many of whom I have been lucky enough to work with over the last 40 years.

“Three of Pink Floyd met there so in essence we were formed under the roof of the Polytechnic; we rehearsed in the common room in the basement and made some of our first performances there. Not only did studying architecture teach us some useful stuff, but it also gave us an opportunity to develop and put us in touch with some fantastic mentors and industry contacts that have helped us along the way.”

Alan Fisher, Head of Music and Interim Dean of School of Media, Arts and Design at the University of Westminster, said: “Nick Mason has been at the forefront of the music industry for nearly fifty years. He helped found Pink Floyd, a band which is internationally renowned for innovation, both musically and in terms of stage design and production, aspects of which were undoubtedly influenced by the band members’ architectural education at the University.

“Other alumni would argue that Pink Floyd’s presence at the Regent Street Polytechnic really helped to shape the atmosphere and influenced the experience of student life for those who attended at the same time.”

Today the University of Westminster continues to provide a similarly inspiring and nurturing environment for emerging talent which brings down disciplinary boundaries and teaches critical thinking that equips students for professional life.

This year marks the 130th anniversary of the first classes in architecture and construction given at the University of Westminster. Westminster’s School of Architecture and the Built Environment is one of the UK's leading centres and one of the few schools to cover the majority of the disciplines that go into the shaping of cities, which provides a uniquely interdisciplinary context for study. The undergraduate programmes make use of strong links with industry professionals, and the quality of its research was judged as ‘world-leading’ with 90 per cent judged as ‘international’.

The University of Westminster’s Media Arts and Design School is one of the leading journalism and media studies centres in the world, attracting students worldwide. Multimedia journalism, public relations, radio and television production are among the courses taught at undergraduate and postgraduate level by expert staff and leading industry figures through an extensive visiting lecturer programme.