Over 3000 #WestminsterGrads graduate on London’s Southbank

Final year students from all five faculties celebrated finishing their degrees in the sun at London’s Southbank Centre. 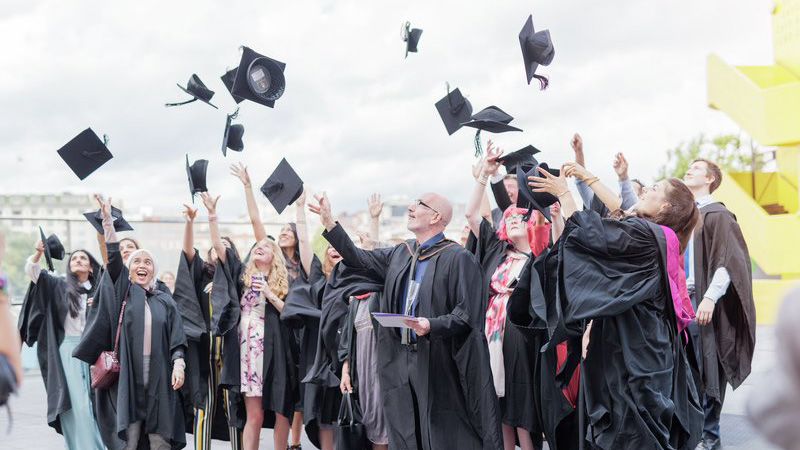 From 10-12 July 2017 London’s Southbank was filled with over 3000 Westminster students, the largest cohort in ten years, celebrating their successful graduation from university.

On Monday 10 July, students from the School of Media, Arts and Design and the Faculty of Science and Technology walked the stage collecting their degree certificates. They shared the stage with Honorary Doctorate Dame Liz Forgan, who was celebrated for her contribution to journalism and the arts, said: “Nothing is more inspiring than seeing young people celebrate this amazing academic achievement as they are on the threshold of becoming the people they will be in work and in public life.”

The final ceremony was hosted on 13 July, for students from the Faculty of Social Sciences and Humanities where Sir Richard Arnold QC, who received an Honorary Doctor of Law, joined the successful students.

Vanessa Carralero, a graduate from the PR and Advertising BA Hons tweeted a picture in her cap and join, saying “When dreams come true … #PRAdv #WestminsterGrad #Graduation”.

Krishnan Kuruppu celebrated his first, sharing his graduation picture and saying: “Graduating today with a 1st Class Honours! Thanks to @DPIRWestminster at @UniWestminster for this incredible journey #WestminsterGrad”

After the ceremonies, the students and nearly 10,000 guests were treated to a drinks reception in the Royal Festival Hall. From everyone at the University of Westminster, we want to congratulate all of our graduates, and wish them the best of luck for the future.

You can see more from our graduates on the #WestminsterGrad hashtag.