Following on from the successful screenings of Fight Club and The Experimenter, the Faculty of Science and Technology’s Psychology at the Movies series will return to Regent Street Cinema on Thursday 4 February, screening the Oscar-winning film A Beautiful Mind starring Russell Crowe. 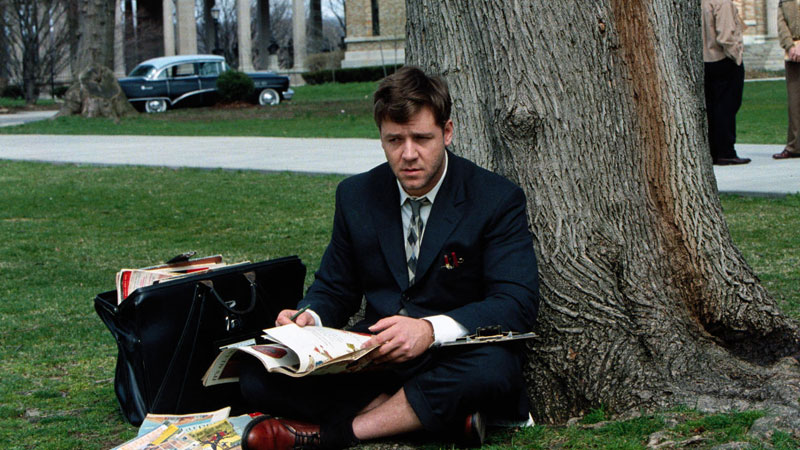 Reflecting the essence of the Psychology at the Movies series, the screening will be followed by a discussion about the psychological aspects of the film led by academics from the University’s Department of Psychology.

A Beautiful Mind is a drama inspired by the life of John Forbes Nash Jr. This mathematical genius, played by Russell Crowe, made an astonishing discovery early in his career and stood on the brink of international acclaim. He soon found himself on a painful and harrowing journey of self-discovery once he was diagnosed with schizophrenia.

In 2002, the film was nominated for eight Oscars and won four including Best Picture and Best Director for Ron Howard.

Bryan Bonaparte, Visiting Lecturer and Module Leader in Psychology, commented on the purpose of the Psychology at the Movies series, saying: “Using movies is proving to be very effective. This has led firstly, to me setting up the Psychology Film Club in our Department at Cavendish Campus and now to the idea of using movies to learn and debate perspectives of psychology and human behaviour, not just with students and staff but for the wider public.

Psychology at the Movies gives the audience the opportunity to see old and new films through a new lens, including some films that have never been seen on a big screen before but only on DVD or online. The interactive session takes place every first Thursday of the month with different films and speakers.

This event is open to the public and tickets are limited on a first come, first served basis. Tickets are £11, but University of Westminster students can attend for a discounted price of £6, and staff for £7.