October news from the Centre for Law, Society and Popular Culture. 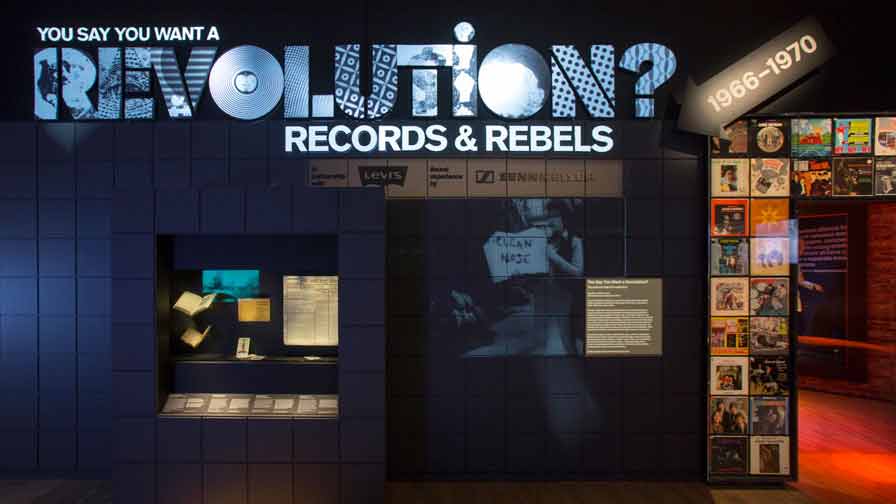 The first two events in the Theory Meets Practice series took place with well received talks by Silvia Schmidt and Robert Allan. Find out more about future events in the series.

Danny Nicol blogged on Law and Doctor Who.

To tie in with the Film Matters series on 1966, we organised a student field trip to the Victoria and Albert Museum in October to see the exhibition 'You Say You Want a Revolution? Records and Rebels 1966-1970'.

"This exhibition takes an in-depth look at the cultural significance of the late 1960s and how the music, film, fashion, design and political activism during this era played their part in shaping the world we live in today.

"From Woodstock to the Isle of Wight, from the Cold War to the Vietnam War, this seven-section experience highlights the ‘revolution’ that took place in all areas of society. The British impact is made clear from the start with a glimpse into ‘Swinging London’ – particularly poignant as its nucleus (Carnaby Street) is just a stone’s throw from the University of Westminster campus.

"Ultimately, it feels as though the hope of creating an almost utopian society was a running undercurrent of the era. Although we still haven’t arrived at that point, the exhibition highlights just how much change can be achieved when masses unite."

Andrew Smith submitted evidence to a committee on the future of parks, and he has been appointed to the Greater London Authority/Parks for London Action Group, set up to look at the issues of staging major events in parks.

Andrew also took students studying his Eventful Cities module to Leeds for their annual Light Night event, where various light installations are installed in public spaces, and cultural institutions open late. The project is part of wider efforts to diversify the profile of people who inhabit the city centre at night. While they were in Leeds, students and staff also got to attend the 'Light, Art Cities Symposium', which was staged to coincide with the Light Night.