Dr Indu Shahani, Sheriff of Mumbai and Principal of H.R. College of Commerce and Economics in Mumbai was welcomed as the special guest and keynote speaker at the International Scholarships Reception. 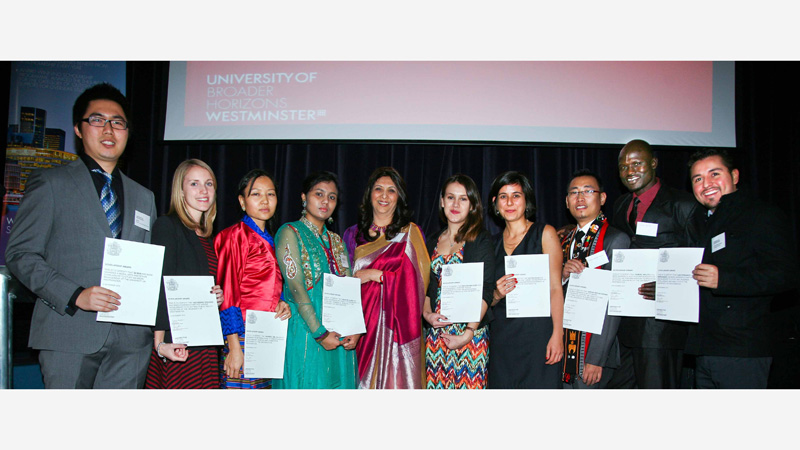 The event was held at International Students House in London on 8 November to welcome new students into the University of Westminster’s scholarships programme, which supports around 700 students from around the world each year.

In a moving speech describing the evolution of the close relationship between the University of Westminster and Mumbai’s H.R. College of Commerce and Economics, Dr Shahani announced two new scholarships which will be offered to Westminster Business School’s graduating students, news of which was warmly received by Barbara Allan, Dean of WBS. A number of students from Mumbai have already benefited from scholarships at Westminster.

Opening the event, Pro Vice-Chancellor Dr Myszka Guzkowska thanked the University’s partners – individuals, charities and companies – who have generously helped increase the pool of scholarships on offer, and added that with the new tuition fee structure and increased costs of living, philanthropic support for scholarships was becoming increasingly important in making it possible for promising young people to fulfil their potential.

One of the University’s most recent partners is Windle Trust International, with whom we will be working to provide access to education and training for those affected by conflict in Africa.

Dr Guzkowska announced the launch of a new society to recognise the support of individuals who make an annual gift of £1,000 or more towards student support. It will be named after Robert Mitchell who dedicated over 50 years of his life to the success of the Polytechnic following his own education there.

Visit our Robert Mitchell Society webpage for more details and how to join.

A selection of images from the event