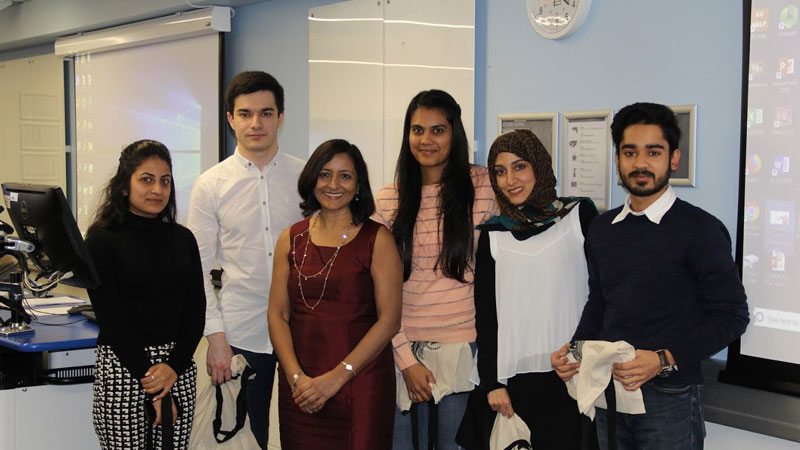 In line with the season of giving, students were tasked with working in groups to raise funds for a charity of their choice. The challenge, which lasted a total of six weeks, was designed to test their skills of organisation, resilience and leadership, while helping them to become ethically minded, responsible and successful entrepreneurs.

Students had to organise a campaign and work together with their chosen charity in order to raise the most amount of money within a one week period. They participated in various activities such as  shaving beards and moustaches at the end of Movember, while collecting funds through the ‘JustGiving’ website. Each student employed persuasion, promotion and networking skills while using their entrepreneurial assets, initiative and maturity throughout the challenge.

The winners, which were announced on 6 December, were SDE (Society Driven by Entrepreneurs) Group, who raised £2050.45 for Oxfam, followed by Ultimate Vision Group, who raised £1000 for Syria Relief, in second place. Socio-Ventions Group placed third, having raised £906.65 for The Shots Foundation. Other charities that students raised funds for included Cancer Research UK, Great Ormond Street Hospital Charity and RSPCA. The students raised a grand total of £6011.69 overall.

Representatives from each charity were invited to attend to celebrate the students’ achievements, with John McLaverty, Education and Youth Advisor at Oxfam and Wael Alabed from Syria Relief coming to share their experiences in working with our students for their respective charities.

Dr Spinder Dhaliwal, Module Leader for ‘Entrepreneurial Mindset and Opportunities Creation’ and organiser of the fundraising challenge, shared her thoughts on the students’ success: “The students illustrated what can be done in a short space of time using their business acumen, charm and determination. They were excellent ambassadors for Westminster Business School and were commended by their charity hosts.”

Student Nishu Gupta also commented: “Thank you for giving us this opportunity. It was really an amazing experience. We also had the chance to learn so much about entrepreneurial skills!"

Find out more about the MSc Entrepreneurship, Innovation and Enterprise Development course offered at the University of Westminster.