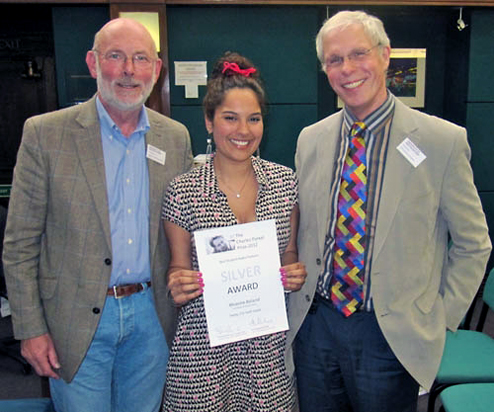 Radio Production at the University of Westminster continues its prize-winning streak. Third year Rhianne Boland took the Silver Award Charles Parker Prize for Best Student Feature. The award was given at the Charles Parker Day, which this year was hosted by the University of Westminster. Rhianne’s feature explores issues of race and identity, based on John Agard’s poem ‘Half Caste’.

The judges’ citation said “we appreciated the technique of mature understanding, hooking in listeners by stealth, allowing them the space to think about what is being said. I thought the cast list was ambitious, strong, confident, very balanced, and used lots of wit, really classy, an outstanding piece of work.”

Rhianne’s prize is a two-week placement at an independent radio production company and copy of the SADiE 6 editing software.

The annual Charles Parker Day is a conference honouring the work of the influential BBC producer, best known for the series ‘The Radio Ballads’. Charles Parker has a Westminster connection as he taught at the Polytechnic of Central London from 1967 up to his death in 1980.

In other news, recent Radio Production graduate Frank McWeeny has been nominated in the category Rising Star at this year’s Sony Awards. The Sonys are the equivalent of the radio ‘Oscars’, recognising the best programmes and talent across the UK. The nomination is for Frank’s Anglo-French hip hop electronica show, devised originally for our student station Smoke Radio, in an entry from French Radio London. This follows his success at this year’s Student Radio Awards, when Frank was awarded Gold for Best Newcomer. The Rising Star category is decided by a public vote and the result is announced at the Sony Award ceremony on 14 May in London.

Dr Matthew Linfoot, Course Leader for Radio Production at Westminster, is thrilled with Rhianne’s and Frank’s success: “The Charles Parker Prize is strongly contested, with many entries coming from post-graduate students, so Rhianne has done extremely well in this competitive field. And we’ve got our fingers crossed for Frank too – we’ll all be voting for him”.

Caption: Rhianne Boland with the judges receiving her Silver Award for the Charles Parker Prize