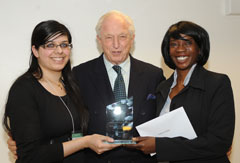 The contest was organised by the Worshipful Company of Arbitrator’s - a leading voice in domestic and international arbitration.

The competition was won by a team from the University of the West of England.  They will travel to Paris in February to take part in the ICC Sixth International Commercial Mediation Competition. The runners-up in a very close final were the team from the University of Westminster.  The Master's Award for the best relationship building with the other team went to the London School of Economics and the CIArb President's Prize for best advocating skills was won by London Metropolitan University.