Alumnus and senior TV Executive Michael Jackson returned to the University of Westminster on Monday 27 April for a very rare and wide ranging conversation. 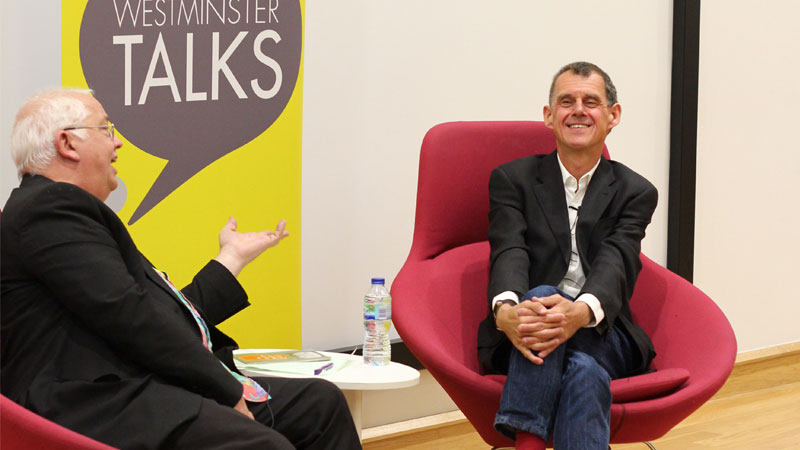 The event was attended by Westminster alumni, students, academics and external guests, all eager to hear about Jackson’s impressive and inspirational career in the media.

When asked what tips he had for budding media students, Jackson stated, “You have to stand for something” and pointed towards the importance of having a passion and a love for the media.

Graduating with a 2:1 BA in Media Studies, Jackson is notable as one of the first media studies graduates to reach a senior level in the British media.

Led by former Faculty of Media, Arts and Design lecturer John Mair, Jackson answered questions relating to both his early studies and his career choices. For the last decade Jackson has been a senior TV Executive in the US.

Speaking of his time studying at the University of Westminster (previously known as the Polytechnic of Central London), Jackson said:

“What made the course successful was the fact that it had both the theoretical and the practical aspects to it.”

Having graduated in 1979, Michael Jackson went on to become a leading British television producer and executive. Jackson became the organiser of ‘The Channel Four Group’, having written his final year dissertation on the prospect of a fourth national television channel in Britain. He forged an illustrious career in media as Chief Executive of Channel 4, controller of BBC One and BBC Two, and Head of BBC Music and Arts. He also invented the seminal TV series The Late Show and The Media Show.

Jackson was instrumental in kick-starting Channel Four, drawing in large audiences with successful programmes such as Big Brother, So Graham Norton and Da Ali G Show as well as dramas like Queer as Folk and Longitude.

The University’s Vice Chancellor Geoff Petts said: “Michael Jackson has had a magnificent and diverse career. He has genuinely made a huge contribution to the future, and is a fantastic example of someone who has used the media to make an important impact on our lives.”

Media is taught within the University of Westminster’s Faculty of Media, Arts and Design based at our Harrow Campus. The Faculty plays a significant role in educating the next generations of journalists, filmmakers, photographers and communicators. It has proven to successfully prepare its graduates to lead and shape creative industries.

Read a full list of undergraduate and postgraduate courses in media available at the University of Westminster.