Meral Duzgun, a Cultural and Critical Studies MA student at the University of Westminster, represented Kurdish women at the conference in Beirut. 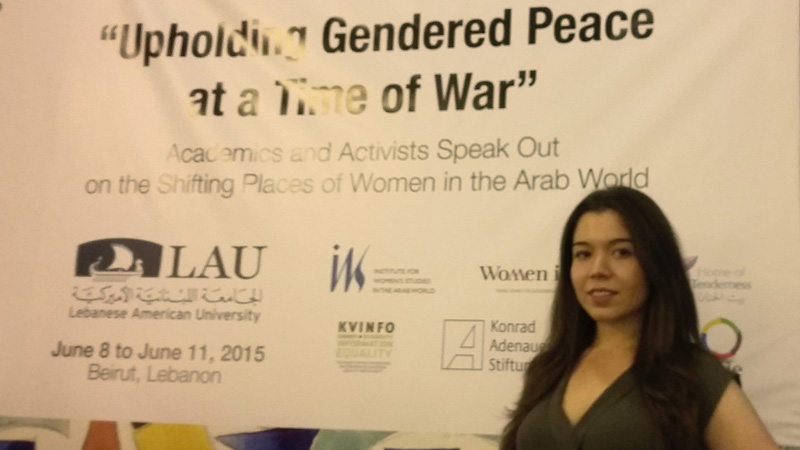 Meral presented the research she had undertaken for her dissertation paper The Kurdish Women’s Movement: challenging gendered militarization and the nation-state at the conference Upholding Gendered Peace at a Time of War – academics and activists speak out on the shifting places of women in the Arab world. Her paper addresses how the implementation of gendering, particularly in the field of war, can contribute towards sexual violence being used as a weapon of war in order for states and militaries to exert masculine dominance.

Speaking of her findings, Meral said: “I believe the women of Rojava’s YPJ units have transgressed the idea of what it means to be a woman in war. They have brought to the foreground the strong idea of the woman as active in the field of war, which goes against the more patriarchal and stereotypical notions of the female gender.”

High-standing academics and activists from around the world, including UK human rights lawyer Margaret Owen OBE and Dr Nawal El Sadawi, author and pioneer of Egyptian feminism, attended the conference. It was organised by the Institute for Women’s Studies in the Arab World, the Lebanese American University (LAU) and think tank Women in War. The conference was sponsored by the International Organisation of La Francophonie (OIF) and the Danish Centre for Gender, Equality and Ethnicity (KVINFO).

Meral who graduated from the University's English Literature and Creative Writing BA Honours before continuing on to postgraduate study, said: “Gender and the Kurdish movement are two issues which I care a lot about, and the chance to represent both these issues and have my work recognised is something I really appreciate. I wouldn’t have been able to do so without the knowledge I gained on the MA Cultural and Critical Studies course and the guidance I received when writing my research paper. Also, one of my lecturers drew my attention to the conference and encouraged me to submit my paper. I was then invited to present it in Beirut!”

Meral has written a feature article for the Guardian entitled Turkey: A History of Sexual Violence in which she explored the sexual violence used against Kurdish people in Turkey by state officials. The article was shortlisted for the Guardian’s International Development Journalism Competition which resulted in the Guardian sending her on an investigative journalism assignment in Nepal to report on the issue of indoor air pollution in developing countries. She has also been commissioned as a screenplay writer for the BBC’s E20 programme.

The Cultural and Critical Studies MA is an interdisciplinary course within the Faculty of Social Sciences and Humanities offering students the rare opportunity to study contemporary critical and cultural debates across a wide range of fields. Modules are taught by expert staff from a number of different disciplines, giving students the chance to follow particular themes in the areas that most interest them.