March news from the Centre for Law, Society and Popular Culture. 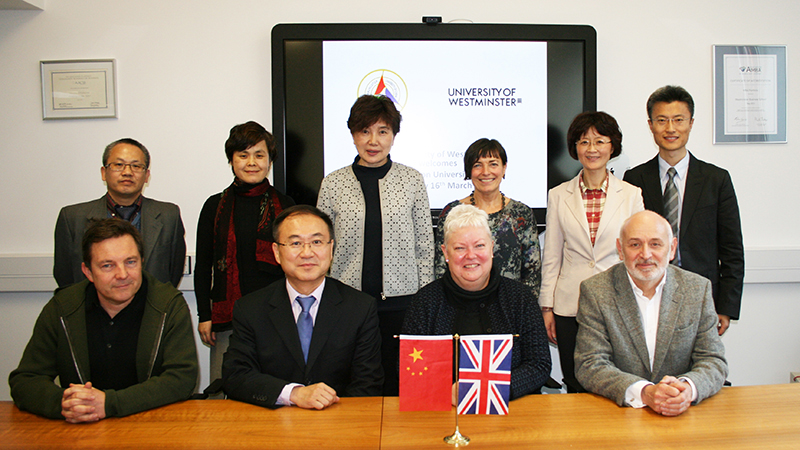 We concluded our fairly packed Theory Meets Practice series with two final events, a screening of A Lion's Trail and a panel discussion on Football Image Rights.

Guy Osborn, along with Liz Duff, Head of Westminster Law School met a delegation from the Chinese University of Communication to discuss possible future collaborations. The meeting was captured for posterity (see above image). More to follow as this develops.

Students on the LLB module Law and Sport in Contemporary Society were taken on a guided tour of Lord’s Cricket Ground.  The students really enjoyed the visit. The picture below shows them at the Nursery end before a final visit to the Nets.

We were joined for the trip by Prashant Sharma from the LLM International Law course who has played representative cricket for India. Prashant wrote, ‘I was lucky enough to be a part of the group that went for a tour of the iconic Lord’s cricket stadium headed by Prof. Guy Osborn. It was a wonderful experience and I got a taste of what Lord’s is like on a match day. I will definitely treasure the memories of seeing the same view, and walking on the same stairs, as players like Tendulkar, Richards and Botham. I would like to thank the University of Westminster for providing such a great opportunity’.

Steve Greenfield and Guy Osborn had a gold standard open access article published entitled Reconceptualising the Standard of Care in Sport. The case of youth rugby in South Africa and England. This is the latest in a series of outputs as part of an ongoing research initiative with colleagues at North West University.

Dr Paresh Kathrani has been working with European partners on a high school video competition as part of the EU-funded WISE project  One of the general aims of the project is to reaffirm the memories and lessons of the Second World War amongst children. The high school competition gives 14-18 year olds across the EU the opportunity to submit a video on the war, with a view to attending Auschwitz in Poland in April 2016.

Finally, Danny Nicol continues his work on Doctor Who and has blogged about the Zygons.