One unique feature of the WBS postgrad experience is the Residential Week-end workshops that each of the main full-time taught Master’s courses is required to run, taking students to an off-site location away from the distractions of London life, enabling them to concentrate on an intensive learning experience where they can be totally immersed in the task at hand. Originally pioneered at the request of then WBS Dean Professor Len Shackleton to “add value” to the course offering, these residentials are now considered an essential part of the ethos of their host courses. 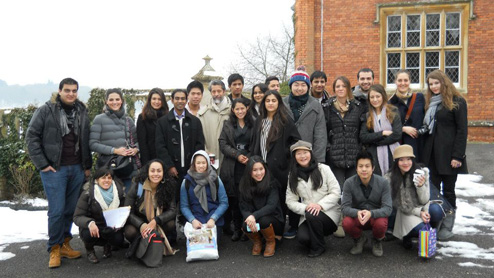 The MA/MSc Marketing Management Residential was held last week-end at Latimer Conference Centre, organised by Course Leader Donna Mai with help from Anna Zacharewicz. Other staff in attendance were Zena Lutrin, and MBS HoD Jaafar El-Murad. There were 70 students, 19 from the new January intake, and 51 who joined us last September. This was the first real opportunity for the two cohorts of students to meet, and it was greatly appreciated by all.

The learning experience started the moment students boarded the coaches outside Mme Tussaud’s at 1330 on Friday, working on tasks issued in advance in their “Goody bags”. Donna had arranged for the event to be sponsored by Marketing magazine and The Economist, each of which had provided a complimentary copy of their publication; and The Marketing Society, who provided each student a copy of their new book “The Future of Marketing”. This had been compiled by asking 50 CEOs from some of the world’s most successful companies to answer a single question: 'What role will marketing play in the future success of your business?' The fascinating variety of answers, underpinned by some strong common themes, are all published in this beautifully designed, hard-back book – which normally sells for £29.99.

Students were put to work as soon as they arrived at Latimer on an online marketing simulation, setting up their companies, deciding their STP, product design, channel and communication strategies, and for most groups Friday night did not end until 2300. This was followed by an early start on Saturday with a results debrief and three more rounds of decisions. Whilst working on the simulation, students were also tasked to complete a 250 item marketing quiz, to write a time-constrained response to a news release, and to prepare and present in the plenary session a response to a distribution question. The final task was issued to students on Sunday morning as they boarded their coaches to return to London to complete on the way home.

Saturday night was an “awards night”, at which many photographs were taken. As in previous years Anna had made sure to bring the WBS Banners, which were prominently displayed and feature in many of the photographs of enthusiastic, highly motivated students. Many of these photos have now been sent to friends and family at all points of the compass and represent the most positive word-of-mouth the School could hope for. Although the dinner ended around 11pm, some students made the most of this rare opportunity to develop their relationships with new friends from around the world, and kept going until 2.30am and in some cases even 4am!

The unanimous feedback from the students was that this event was the high-point of their year at UW. They were impressed by the venue, by the drive through the beautiful snow covered countryside, by the opportunity to spend time with their colleagues and faculty, and above all by what they learned. They said that the simulation enabled them to try out risky decisions about many aspects of marketing, whilst showing them how these different disciplines work together. Many said that being forced into groups not of their own choosing to work under pressure in a concentrated period helped them to acquire valuable transferable skills that they will be able to draw upon for years to come.