The first cohort of graduates from the world’s only two-year MA Menswear course showcased their work in yesterday’s runway show, which featured a mix of fashionable and functional eye-striking designs. 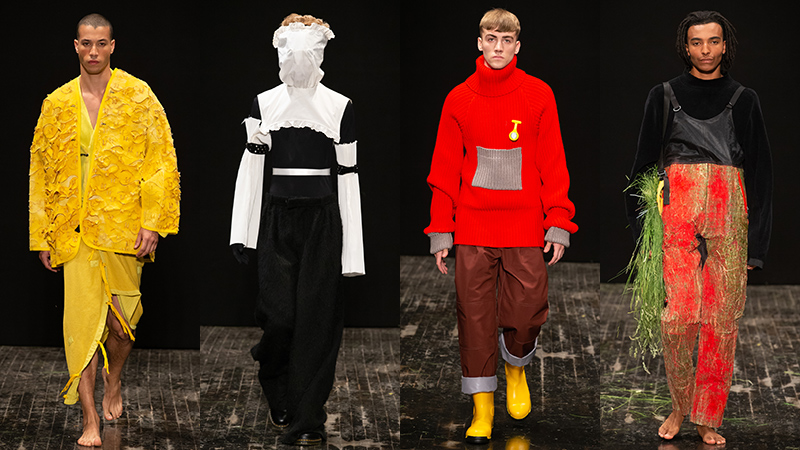 Collections from eight designers hit the runway at Heaven in London on the final day of Fashion Week.

Inspired by a remote Austrian skiing village where his father grew up, and referencing vintage garments from his family, Roman’s intensely personal collection (second from left) creates a darkly evocative statement which echoes the region’s mythical folklore.

At the age of six, designer Louise Liu’s hometown of Harbin, China was hit with the worst floods in over 44 years. This event prompted her to explore the function and construction of life-saving inventions in clothing.  Her collection referenced the uniforms of the Royal National Lifeboat Institution, fusing traditional and modern technologies, her functional outerwear garments are contrasted with chunky bright hand-knitted sweaters.

Graduate Robert Newman presented his collection The Optimist, which began with a vision of live grass outerwear that would grow and renew itself, protecting the wearer in response the weather. While the vision is still work in progress, Rob has developed innovative, experimental, hand-processed fabrics for his collection. Referencing artist Wolfgang Laib and gardener Piet Oudolf, he has created new, technical outdoor clothing.

Throughout the course and under the direction of Liliana Sanguino, these graduates have been taught by some of the most significant tutors in menswear education including Ike Rust, Matthew Miller, Simon Foxton, Charles Jeffrey, Ben Reardon, Liam Hodges and Alex Mullins.

Read news story about the world’s first public Menswear archive in the University of Westminster.