The University of Westminster hosted a reception at its Regent Street campus following Lord Asa Briggs’ memorial service held by the BBC at All Soul's Langham Place on 5 October. 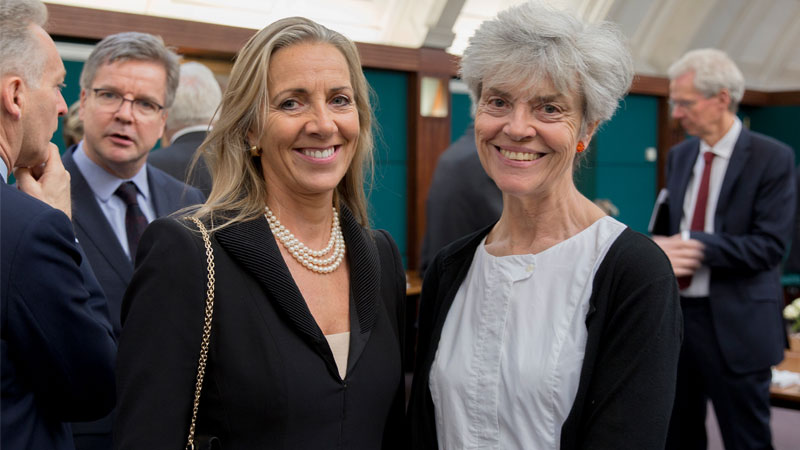 Tributes came from the Provost of Worcester College Oxford, Sir Jonathan Bates, and the vice chancellors of Sussex University and The Open University, two universities that Briggs had helped to create. The University of Westminster’s Professor Jean Seaton also gave a speech about Brigg's history of the BBC and the uses of that wonderful history.

Among the guests at the reception were Lord Briggs’ family and friends, including BBC presenter David Dimbleby and Chair of the BBC Trust Rona Fairhead, as well as former students, including Lord Sainsbury and media baron Rupert Murdoch.

,
Rupert Murdoch with Lady Inkin, David Dimbleby and a guest
,

The BBC historian, leading specialist in the Victorian Era, Lord Briggs died on 15 March this year, leaving a prodigious public and intellectual legacy behind him.

Professor Miles Taylor, Director of the Institute of Historical Research at the University of London, called Lord Briggs a ‘public intellectual before the term had been invented’ at the memorial service.

During the Second World War Lord Briggs served as a member of Bletchley Park’s Hut 6, the section that deciphered Enigma machine messages from the German Army and Luftwaffe. He later proofread Winston Churchill’s four-volume work, ‘A History of the English-Speaking Peoples’.

At Worcester College Oxford Lord Briggs re-invented how economics and history were taught: he wrote about the great philanthropists of the 19th century, the chemist shop - Boots, the book trade, Marx, the Chartists, and Victorian literature. He created and sat on a myriad of public bodies, reforming nursing and the role of the Commonwealth universities, as well as participating in numerous scholarly endeavours.

This creation of public institutions went alongside founding many new genres of history. His great Victorian trilogy re-invented how the period was seen, and in his five-volume history of the BBC he founded thinking seriously about the media in an utterly original way.

Lord Briggs was made life peer in 1976 as Baron Briggs of Lewes in the County of East Sussex for his contribution to higher education through his work as Professor of Modern History at Leeds University, and Professor of History, Dean of the School of Social Studies, and Pro Vice-Chancellor and Vice-Chancellor at the University of Sussex.

University of Westminster Professor of Media History Seaton, who spoke at the memorial, is the current BBC historian and released ‘Pinkoes and Traitors: the BBC and the Nation 1970-1987’ in 2015. She has also been director of the Orwell Prize since 2007.

Jean Seaton said: “Asa’s insatiable curiosity spanned the 20th century, and he has been a great innovator and historian of the Victorian Era, entertainment and philanthropy. His life was dedicated to expanding education and expanding our horizons. So this building is just the perfect building because it’s like the life he wrote about.”