Organised and hosted by the University of Westminster, guest speakers Brenda Campbell and Judy Khan QC, who represented the families in the Hillsborough Inquests, gave a talk with deep insights into the case on the University’s Little Titchfield Street site. 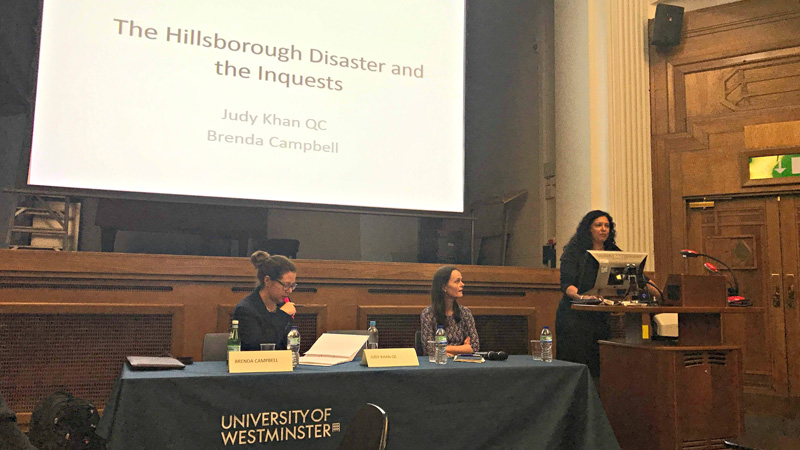 As a result of the events at Hillsborough on 15 April 1989, 96 men, women and children lost their lives. Following an application by the Attorney-General, in December 2012 the High Court quashed the verdicts in the original inquests and ordered fresh inquests to be held.

Guest speakers Brenda Campbell and Judy Khan QC were representing 77 of the victims in the Hillsborough accident and worked closely with the families of those unlawfully killed.

According to their words, on the day of the accident 24 000 people had to access Hillsborough Football Stadium from one single entrance. Massive groups of people had been swept down to the Stadium that was not properly policed, even though there had been police presence. The central pens were already full and beyond capacity in the minutes before the match, they explained. “It would have been so breathtakingly easy to avoid the accident, had there been someone to direct people,” Judy Khan said.

David Duckenfield, match commander, was said to have made up a false narrative to blame the fans in what Judy Khan described as “the most iconic miscarriage of justice.” There was an ‘evolution’ of the statements the police officers gave. Junior officers who refused to amend their statements were pressured by Senior Police Officers.

“Police officers held firm on the fact that Liverpool fans were out of control. So we had a job to do – challenge them,” Brenda Campbell said.

Asked on what triggered the fresh inquests, they explained that it was a long process of relatives of the victims refusing to give up on the case and win justice for their loved ones.

“We represented families that were let down so badly before and it was a huge responsibility. Our objective was not to leave a stone unturned,” Mrs Campbell concluded.