Sarah Mower, fashion critic, columnist at American Vogue and advocate for young designers, has been named Honorary Doctor of Letters (DLitt) by the University of Westminster. The award was presented at the University’s autumn graduation ceremony at the Royal Festival Hall in London on 28 November. 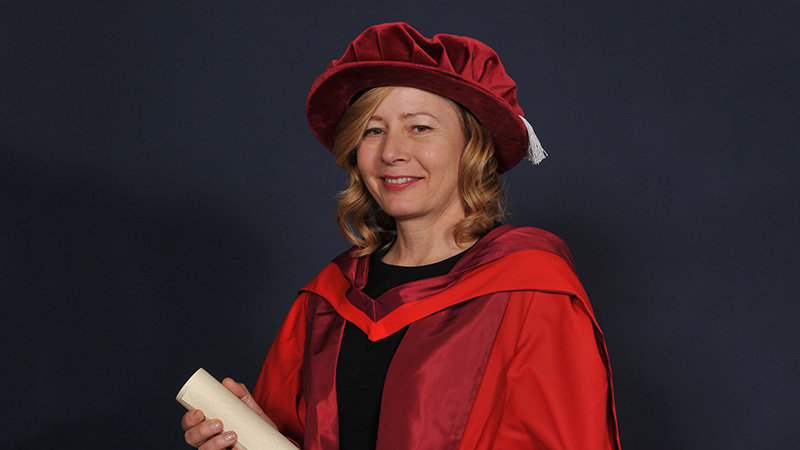 Mower was recognised by the University for her long commitment to the development and support of young designers in the UK. Over the last 15 years, she has been a passionate advocate of emerging British talent. Her support has been an instrumental force behind the rise of designers such as Christopher Kane, Erdem, Mary Katrantzou, JW Anderson, Jonathan Saunders, and Simone Rocha.

Mower’s career in fashion began after winning the British Vogue Talent Contest while studying at the University of Leeds. She moved to London in the early 80s writing for Ms London magazine before securing a position as fashion editor at The Guardian. She has since worked for prominent publications including US Harper’s Bazaar and The Times, and pens regular columns for the American and Japanese editions of Vogue.

Mower is an outstanding advocate for UK Fashion education and ambassador of the UK’s fashion industry in the global context. In 2009 she was appointed as the British Fashion Council’s (BFC) Ambassador for Emerging Talent and co-chair of the BFC New Gen Committee. She plays a significant role in raising the profile of the British fashion industry within the global community and ensuring that the future UK-trained fashion talent is given the global platform needed to have the best start to their careers. Mower has been pivotal in establishing the BFC’s Education Foundation and liaising with the government to support and champion fashion education within the sector to ensure it remains the best in the world. She was awarded an MBE in 2011 in recognition of her influential contributions.

Mower has supported the BA Fashion Design course at the University of Westminster and now also supports the new MA Menswear course, championing not only the courses but individual students and graduates as well.

Speaking about receiving the award, Sarah Mower said: “I am extremely honoured to receive this honorary doctorate from the University of Westminster. In the times the world is facing, we need the voices of young, educated and creative thinkers and doers more than ever. I am inspired to see the enormous diversity of the community which is graduating from Westminster, and the spectrum of highly relevant subjects which will prepare them to defend freedoms, to articulate the global issues which face us, and of course entertain us too.”

Speaking about Mower, Course Director for BA Fashion Design Andrew Groves said: “Sarah's support and opinion are invaluable to any designer, whether they are the Creative Director of a Paris couture house or a graduating student.

“Her ability to spot new talent and then connect them to the right people and companies that will help that talent thrive is legendary. She has done so much behind the scenes to support young designers, and is driven by an altruistic belief that the best talent needs to be given a platform and the means by which to shine, is truly inspiring.

“We are extremely grateful for her support for so many of our students and graduates, both those that have gone on to have very public careers and those that are now working as part of the design teams in some of the top fashion houses internationally.”

Alongside Sarah Mower, the University of Westminster also praised the achievements of other Honorary Doctorates who received the title at the autumn graduation ceremonies.