Peter Anwyl, Executive Director of International Students House (ISH), has been named Honorary Doctor of Letters (DLitt) by the University of Westminster. The award was presented at the University’s autumn graduation ceremony at the Royal Festival Hall in London on 21 November. 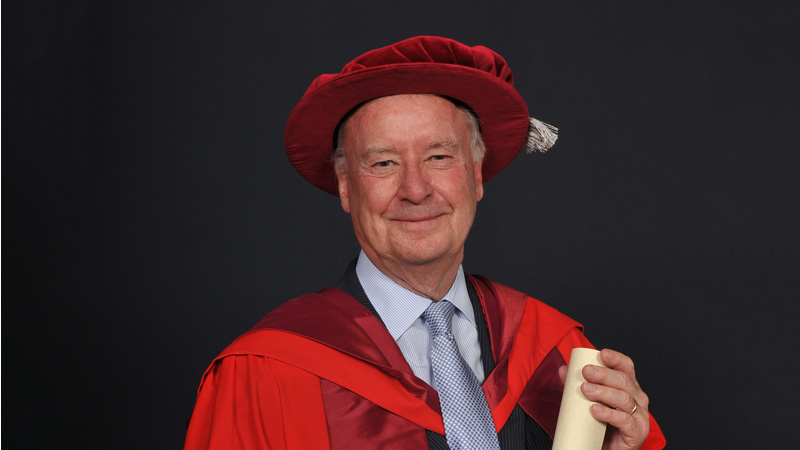 The University of Westminster recognised Peter Anwyl for his personal commitment to the furtherance of international understanding and international education and for his continued dedication to the development of partnerships and scholarships for international and UK Home students through his work at International Student House.

ISH was founded for the betterment of international understanding and provides a unique social, cultural and recreational centre for international and British students alike. They, together with the support of partners such as the University of Westminster, enable university students from the developing world to study in London. Last year the scholarships offered by ISH enabled 37 students from 112 countries to come to London for a life changing opportunity and experience which they can take back to their home country.

In 1993 Peter was appointed as the Executive Director of International Students House which was established in Regent’s Park in 1965. He is the Secretary of the International Students Trust and the Toyota-Shi Trevelyan Trust. He is a former university Governor and retired Chairman of the Finance Committee of the Lutheran Council of Great Britain.

Originally hailing from Rhyl, North Wales, Peter was previously Chief Executive of the University of London Union, a position he held for 15 years, incorporating an exchange as Visiting Director of the Lory Student Centre, Colorado State University. Previously he worked for the National Union of Students for three years as Commercial/Conference Manager. He has been a member of the University of Westminster Scholarships Committee since 2002.

In his acceptance speech, Peter Anwyl said: “I feel very honoured to have been awarded this Doctorate by the University of Westminster, the most diverse university in the UK, in recognition of my work promoting international understanding.”

Speaking about the award Vice-Chancellor and President, Professor Geoffrey Petts said: “The University of Westminster has a proud history of internationalisation and international collaboration. Leading ISH for more than two decades, Peter has actively fostered the relationship between ISH and our University and he and ISH have made a substantial contribution from financial, pastoral, social and educational perspectives to many Westminster students.”

Alongside Peter Anwyl, the University of Westminster also praised the achievements of other Honorary Doctorates who received the title at the autumn graduation ceremonies.