Students from the Interior Architecture BA Honours course have won a number of high profile awards. 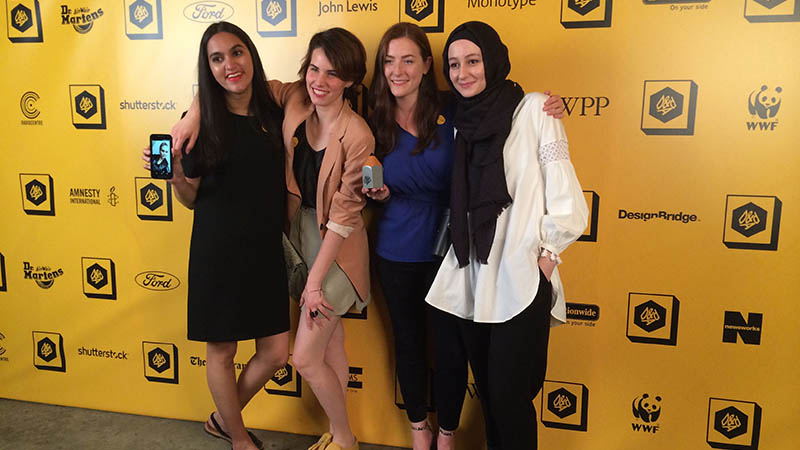 Graduating student Laura Metcalfe won the prize for the Best Student Studio Degree Project in the UK at the Interior Educators Awards 2016. Along with the award, Laura took home a £1000 prize.

Her proposal, entitled ‘Black Box’, is for a theatre and prop shop in Hackney Wick. It explores the possibility of interior architecture as scenography – the design and painting of theatrical scenery. Black Box aims to achieve a design solution adopting a theatrical approach so that users become ‘protagonists’ operating within an architectural ‘stage set’, creating a theatre of the mundane where everyday activities are glorified. The building itself becomes the stage, set for interactions, challenging notions of the interior through movement, materials and alternative uses of a room.

One of the judges, Dinah Casson from interior design studio Casson Mann described Laura’s propsal as “Atmospheric and powerful. Well-developed sense of work from idea to concept, playful and flexible, worked well with the existing building and was technically resolved.”

The award is an addition to Laura’s growing collection of prizes, including the Vola Prize for best portfolio and the Katherine Shonfield Prize for her dissertation at the Westminster Architecture Awards. Fellow Interior Architecture student Carole Su Hua Tan also won the award, which is awarded to a student or students with the highest mark.

Elsewhere, students from the Interior Architecture BA Honours course won a Graphite Pencil award at the D&AD New Blood Awards 2016. Kitty Heston, Linda Tentori, Radima Gudieva, Salwah Joonus and Roxanne Magnusdottir Bjarnason (pictured) won the award for their proposal for a new window display in John Lewis. The design, which included a short film, was called ‘My Everyday’ and featured everyday objects such as post-it notes, a bra and a hairdryer.

The design was created to celebrate once revolutionary objects that are now taken for granted. The design was one of five John Lewis designs to receive a Graphite Pencil award. The awards were established to recognise the best new design talent.

Along with these awards, Interior Architecture students have had huge successes in other competitions. Sara Daaboul was a runner-up at the 2016 Architects for Health Student Design Award in the Guys and St Thomas’ category. The brief was to create innovative designs for places of health and social care, and Sara’s focussed on music, community and health.

Speaking about the students’ success, Course Leader of the Interior Architecture BA Honours Ro Spankie said: “This years graduating third year are remarkable: to have seven students win national student awards is fantastic. I can’t wait to see what they all do next.”

Find out more about Interior Architecture BA Honours at the University of Westminster.