EXP, the Research Centre for Experimental Practice in the Faculty of Architecture and the Built Environment at University of Westminster, launched its innovative web site for Supercrits series, www.supercrits.com, at the Royal Melbourne Institute of Technology/Adapt-r Practice Research Symposium in Ghent last week (11 April 2014). 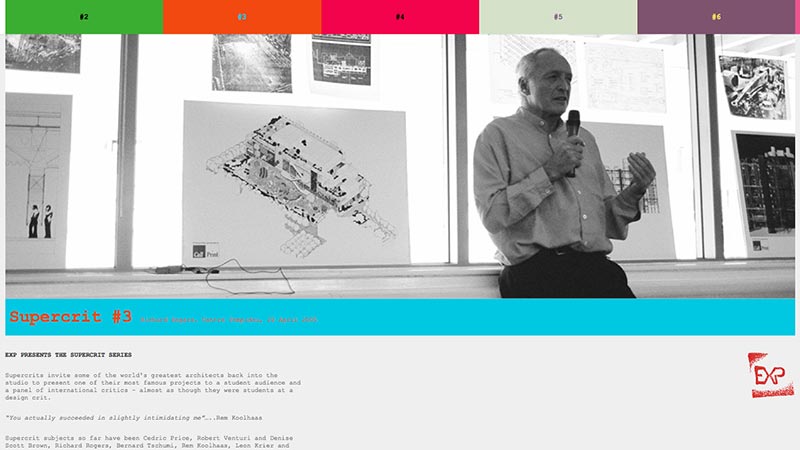 “Supercrits are a brilliant invention and we are proud to host this research by EXP, and facilitate its evolving presentations,” says Professor Katharine Heron, Head of the University of Westminster’s Department of Architecture. “Architects of world renown subject a reputation-making project to the scrutiny of a panel of international critics, and an audience of students and practitioners. The launch of our website is attracting widespread attention.”

The Supercrit events allow extraordinary discussions between some of the world's greatest architects and some of their most vocal critics. Find out what David Greene, of the radical architectural group Archigram really thinks of Rem Koolhaas' seminal book Delirious New York - and what Koolhaas has to say in response. Hear Leon Krier's answer to the idea that his 'model village' for the Prince of Wales, Poundbury, would have been better as a modernist project. Or listen to James Stirling's colleagues explain how 'Big Jim' dealt with criticism of his masterpiece the Neue Staatsgalerie in Stuttgart.

Supercrits, launched in 2003, are an inventive series of talks that invited some of the world’s greatest architects into the studio to present one of their most famous projects to a student audience and a panel of international critics. Subjects have included Cedric Price, Robert Venturi and Denise Scott Brown, Richard Rogers, Bernard Tschumi, Rem Koolhaas, Leon Krier and James Stirling Michael Wilford.

The new website is a light-touch version of the books, and aimed at a wider online audience, forming an essential new resource for students, architects and an interested public. It builds on EXP's experience in developing the Archigram Archival Project, which was aimed at both an expert, academic and popular web audience, with more than two million visits from around the world to date.

The Supercrits site offers a new kind of annotated video record of the events, including notes, illustrations and links, and new essays on the events by Kester Rattenbury. The website has been developed by Filip Visnjic and Eduard Prats Molner. Content has been researched, written and edited by Dr Kester Rattenbury, with Clare Hamman, project manager.

“You actually succeeded in slightly intimidating me”.
Rem Koolhaas, Supercrit #5

Supercrits are an invention of EXP, the research centre for Experimental Practice in Architecture, led by Dr Kester Rattenbury at the University of Westminster School of Architecture.

The Supercrits website went live in December 2013. The launch was to coincide with the RMIT/Adapt-r Practice Research Symposium in which design practitioners explore and develop the research within their own practice. ADAPT-r (Architecture, Design and Art Practice Training-research) is a €4M FP7 Marie Curie Initial Training Network offering a new approach to PhD training for creative practitioners. ADAPT-r is a network of 7 Partner Institutions including the University of Westminster.