Ten thousand images of the work of one of the most iconic of 1960s architecture groups, Archigram, are to be available to view online for the first time – thanks to a ground-breaking University of Westminster project. 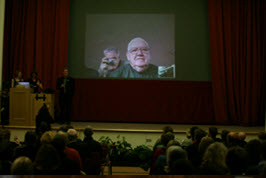 The free Archigram website goes live this month following the project run by the University’s School of Architecture and the Built Environment (SABE) to create what is thought to be the richest digital resource for modern architecture in the world.

A team from the Department of Architecture’s Research Centre for Experimental Practice (EXP) created the astonishing archive following a £305,000 grant from the Arts and Humanities Research Council.

Professor Jeremy Till, Dean of SABE, said: “This is such an exciting project. Until now it has been impossible to get a comprehensive view of Archigram’s work. But now the astonishing range, sheer volume and continuing challenge of the group’s achievements can be seen as never before through the openly available information technology they helped to predict.

“Archigram were the most provocative and visionary of all the 1960s architecture groups. No architects before had looked so creatively at post-war consumer culture and the new possibilities that digital technology would offer.

“Much of Archigram's work became iconic - such as Ron Herron's image of Walking City arriving in Manhattan. Their importance to architecture was recognised when Archigram were awarded the RIBA’s Royal Gold Medal –that institution’s highest honour –in 2002,” he said.

Viewers of the Archigram Archival Project (http://archigram.westminster.ac.uk) will from Monday for the first time be able to examine the full range of drawings, photographs and other material from over 200 projects created mainly in the 1960s and 70s by this group of six of architecture’s most influential figures: Warren Chalk, Dennis Crompton, Peter Cook, David Greene, Ron Herron and Michael Webb.

The site reveals the extent of Archigram's ongoing challenges. World-famous projects including Walking City, Plug-in City and Instant City, can be readily explored in detail, and seen against other visions of, and prototypes for, tomorrow’s lifestyles. A substantial body of built designs -- including a swimming pool for Rod Stewart – as well as other larger proposals – like an unrealised multi-million Monte Carlo casino – can be seen against elusive and beautiful, 'invisible' projects which refused to accept the conventions of traditional practice.

Among the little-seen highlights of the new website are: full copies of the nine-and-a-half magazines which literally made the group’s name; Temple Island, Michael Webb’s mind-blowing explorations of the nature of perspective in architectural representation; and Soria Moria, a collaboration with Cedric Price.

Archigram's involvement was central to the Archigram Archival Project, which builds upon the extensive work done by Archigram member Dennis Crompton on their collection, and links it to the archives held by Ron Herron's son, Simon - as well as to private collections of other Archigram members and their heirs.

“Easy to use, effective in its design and structure, it makes vast quantities of information available under basic typologies: projects; exhibitions, magazines and people.

“The Archive will be invaluable for specialists, but its colourful mosaic leads and clear navigation will attract and stimulate the general public. It is a great tribute to all its creators that the Archive retains the quality and even re-presents the heady excitement of the original work by Archigram members, complete with the often controversial response to it."

The University of Westminster project team was led by Dr Kester Rattenbury and Professor Murray Fraser, with Clare Hamman acting as project manager. The website was devised by Filip Visnjic along with Pierpaolo di Panfilo and Professor Stephen Winter from the University’s Centre for Parallel Computing in the School of Electronics and Computer Science.

For copyright reasons, images on the web are size-restricted. A high-resolution version is also available to view at the University of Westminster for accredited academic researchers.