Human Library reveals hidden lives at the University of Westminster

Two psychologists at the University of Westminster, Head of Psychology Dr Kathryn Waddington and Doctoral Researcher Deborah Husbands, have been working to hear the voices of unheard and stigmatised groups and break down barriers. October saw the University’s third Human Library event to mark Black History Month, in which borrowers can take the time to listen to the stories of human ‘books’. 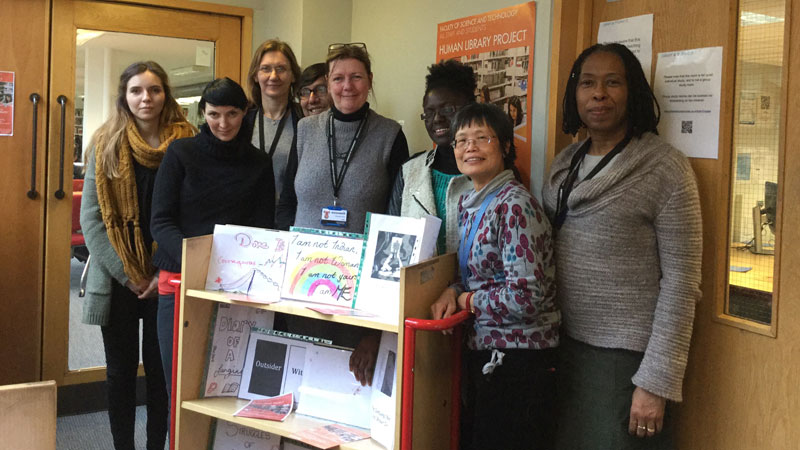 The University has already run several of these Human Library events, in collaboration with Ida Kwan, Senior Academic Liaison Librarian for Library Services, to mark International Women’s Day in March and Black History Month last year. The events are open for any of the staff and students at the University to act either as ‘borrowers’ or ‘books’.

Dr Waddington said that in a Higher Education context there is much talk of values, but she asked how these can be put into practice. “At Westminster we very much believe that our students are co-creators or co-constructors of knowledge and learning. For me the Human Library events are a really good way of showing how we do that. It’s all very well to have that in a document or up on the website, but what does it actually mean for students to be co-creators of knowledge? For me it’s about working together in a non-hierarchical way.”

Dr Waddington even put herself forward to be a book for the International Women’s Day event earlier this year: “My book title was Only a Woman Would Think of That. Importantly it gave me an opportunity to have a discussion with the borrower, who was one of our third-year students. She could ask me questions and reflect on what she’d learned from me, but
I also learned a lot from her,” she said.

Husbands emphasised the voluntary, and open nature of such events. “The Human Library goes across all protected characteristics – it doesn’t matter if you’re of a particular ethnicity; everyone has the opportunity of participating. Our International Women’s Day event was open to the whole University where we had a range of people, students, staff of all ethnicities and from all levels in the University. There’s a huge eclectic mix, and this works wonderfully in events such as the Human Library.”

For Black History Month two events were held at the University’s Cavendish and Harrow campuses. Husbands added: “People have told us the events gave them the opportunity to talk about things that they wouldn’t normally talk about to people they wouldn’t normally talk to. Human Libraries have this fantastic way of connecting communities, breaking down the barriers and giving people the understanding of what it’s really like to live with a certain stereotype, stigma or bias.”

It’s particularly heartening, Husbands said, that the initiative has come from the Department of Psychology. “In my own research with black female students many of them said the problem with psychology is sometimes they’re so busy studying it they don’t have time to be people! It has some real value in terms of the discipline.”

This piece is based on Ella Rhodes’s article on The British Psychological Society’s website.