Professor Jean Seaton and Professor James Curran launched the eighth edition of their book ‘Power Without Responsibility: Broadcasting, Press and Internet in Britain’ at the University of Westminster on Wednesday 4 July. 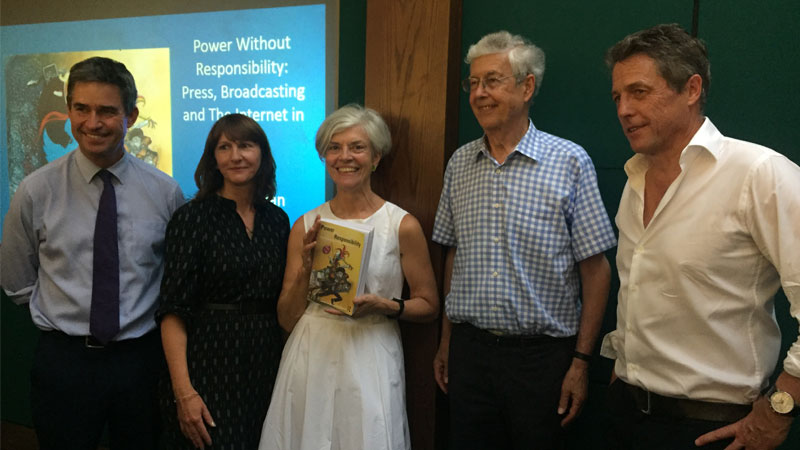 The book was launched at the University’s Regent campus with introductions by authors Professor Seaton from the Westminster School of Media, Arts and Design and Professor Curran from Goldsmiths, University of London and a founding member of the University’s media department. The evening featured a speech by Hugh Grant on press freedom, regulation and responsibility in Britain. Grant has been a long-term campaigner for a more responsible media.

‘Power Without Responsibility: Broadcasting, Press and Internet in Britain’, recently updated with six new chapters and original research throughout, has been in continuous publication since 1981. It has been translated into five languages, copied in numerous countries, and is seen as an iconic and founding text in media analysis. The book puts the history of press, broadcasting and communications at the heart of its understanding and policy recommendations. Professors Seaton and Curran have both in different ways combined research and practical interventions into media policy making and practice throughout their careers.

Following the speeches, an auction of the original cover cartoon was conducted by distinguished journalist and writer David Loyn. Martin Rowson, the Guardian cartoonist who designed the book’s cover, was also at the launch earlier in the evening, and the proceeds were donated to the Winter Shelter at St James’s Piccadilly. Professor Seaton has been working with homeless and refugee charities across London as part of the creation of the new immersive production of ‘Down and Out in Paris and London’, by George Orwell.

Talking about the event, Professor Seaton said: “The event showed how important it is to go on challenging myths about the media - and the role of the academy and research in securing democratic accountability. Originally we turned to history as a way of evading the dominant ideological obsessions of media research then - but now it goes on providing the best way of approaching really urgent contemporary issues.”

The event was attended by leaders of the most active media NGOs in the UK, Hugh Tomlinson from Hacked Off, Su-Mei Thompson from The Media Trust, and Martin Moore from the Media Power Trust as well as renowned academics, journalists and lawyers.