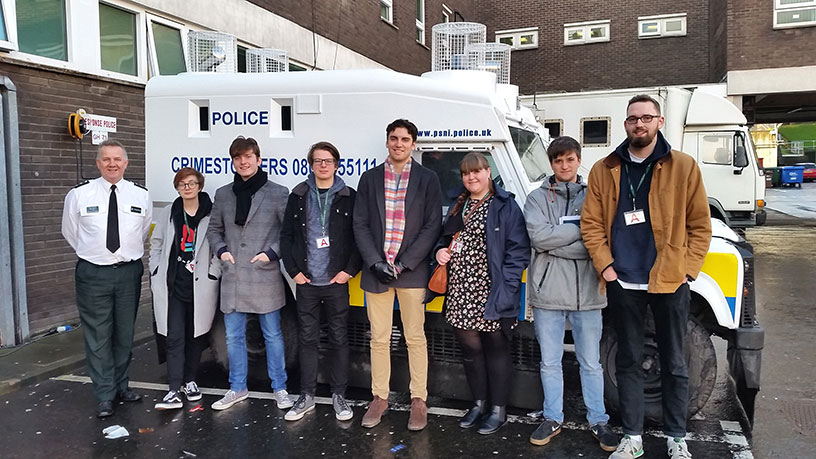 The students are taking a module called The Troubles: Britain and Northern Ireland 1968–1998. The group had the opportunity to meet a number of individuals who were affected by and participated in the violence that blighted the region from the late 1960s to the 1990s. The students also paid a visit to the Police Service of Northern Ireland (PSNI) for the Derry City and Strabane district.

Chief Inspector Alan Hutton (pictured left) gave the group a fascinating talk on how policing has changed in Northern Ireland during the 26 years he has served as an officer, first in the Royal Ulster Constabulary and now in the PSNI. The group also took a tour of Derry City’s historic 17th-century walls, which are still intact. Derry is the only completely walled city in Ireland and is one of the finest examples of walled cities in Europe.

Guided by local expert Mr Padraig MacDermott, the students walked the route of the anti-internment march in January 1972, which became notorious as Bloody Sunday.

Module leader Dr Patrick Smylie said: "Field trips are a great means of bringing to life the history of places like Derry, which students have read about. But they’re also great fun and a great student experience."

In 2017, students from across the Department of History, Sociology and Criminology will be able to participate in field trips to Paris, Berlin and Dublin, partly funded by the Quintin Hogg Trust.