Historian, archaeologist and broadcaster Dr Sam Willis screened an episode of his new BBC Four series ‘The Silk Road’, tracing the story of the most famous trade route in history, at the University of Westminster’s Regent Street Cinema on Tuesday 17 May. 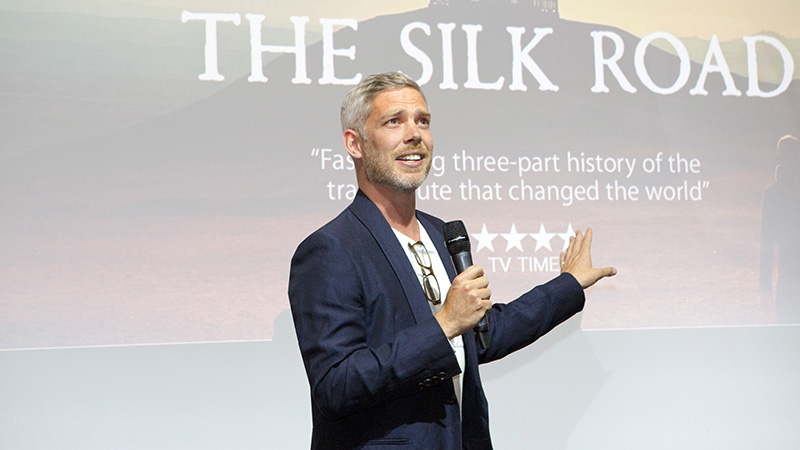 The University was delighted to welcome His Excellency Alisher Kurmanov, Ambassador of the Republic of Uzbekistan to the UK, to open the screening.

The University’s Vice Chancellor and President Professor Geoffrey Petts welcomed high-profile guests to the historic Regent Street Cinema, including HE Alisher Kurmanov; HE Tulga Narkhuu, Ambassador of Mongolia; HE Alexander Vladimirovich Yakovenko Ambassador of the Russian Federation; HE Rehak L’Ubomir, Ambassador of the Slovak Republic; HE Yazmurad N Seryaev, Ambassador of Turkmenistan; and HE Natalia Galibarenko, Ambassador of Ukraine.

The screening of ‘The Silk Road’ marked a celebration of the University’s relationship with Uzbekistan’s Higher Education sector, grounded in our longstanding partnership with the Westminster International University in Tashkent (WIUT).

For centuries Uzbekistan was home to part of the ancient Silk Road where different cultures, traditions and ideas converged. In the series, Dr Willis reveals how the Silk Road was the world’s first global superhighway where people with new ideas, new cultures and new religions made exchanges that shaped humanity and history. “The Silk Road cut across borders – and broke down the borders in our minds,” says Dr Sam Willis.

Westminster International University in Tashkent (WIUT) was cofounded by the University of Westminster in 2002, and was the first University in Central Asia fully accredited to provide UK degrees. A prominent international institution in the region, WIUT represents a distinctive model of UK Transnational Education (TNE): it is an autonomous University whose programmes, leading to UK HE qualifications, are validated by and designed in partnership with the University of Westminster. Classes at WIUT are taught in English, and students are introduced to the culture and learning style of UK Higher Education. Currently, over 3,000 students are studying for a University of Westminster qualification at WIUT. There have been over 2,000 graduates from both undergraduate and postgraduate courses since 2005, many of whom have gone on to form their own businesses or gain employment in public and private organisations within and outside Uzbekistan.

Internationalisation is central to the University’s strategic vision and identity. We have extensive connections with universities and industries throughout the world and our global engagement strategy seeks to strengthen and deepen those connections ever further. Our international partnerships support the development of our academic and research portfolios. Experiences that enable our staff and students to operate in an increasingly interconnected, internationalised world are key to our approach.

Find out more about The Global Engagement Strategy at the University of Westminster.